Last night, I tucked her in and marveled at the way her body stretched the length of her bed. She wrapped her arms around my neck, and I breathed her in, her freshly washed hair sweet and powdery against my cheek.

It wasn’t long ago she was toddling around the house like her little sister. Now she’s a young lady. She’s compassionate and kind. She’s strong, both in character and physically. She doesn’t get caught up in girly pettiness, but rather walks her own line.

I love that about her.

Raising girls in today’s world is an exercise in faith. There’s a lot of talk on what it means to raise strong men, but there’s even more talk about how we’re supposed to be raising strong girls.

Train them to be dragons, to breath fire in this oppressive world. That’s the most common message I hear today, but what does that strength really look like? How’s a fire-breathing girl supposed to behave in this evolving world of ours? 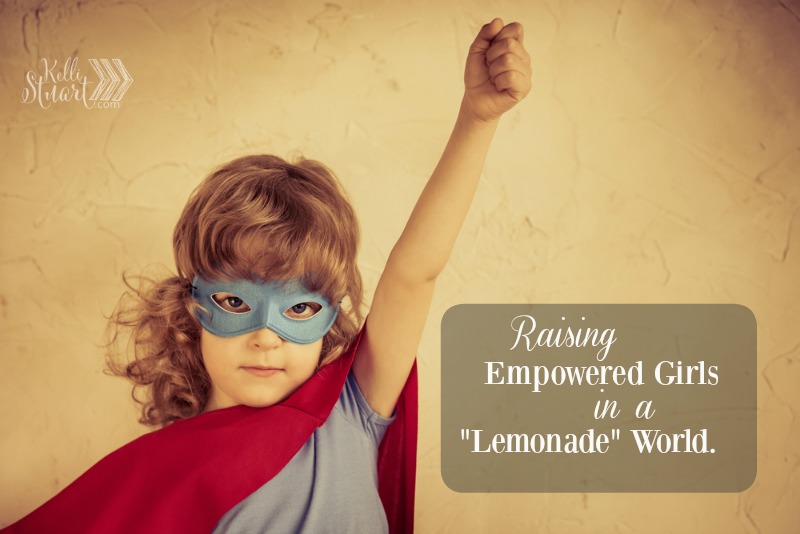 Unless you live under a rock (and sometimes motherhood feels like just such rock), you’ve probably heard that Beyonce just dropped a new album that’s got the world buzzing.

Now, I’ve heard only bits and pieces of the album. I have not listened to every song because, you know, who has time to listen to Beyonce?!

But I’ve listened to a little bit, and I’ve read several of her lyrics, and here is my first impression. Visually, Beyonce’s new videos to go with her songs are appealing. There’s no denying Beyonce can entertain.

The songs are catchy, too. Not in a Hansen’s “Mmm-Bop!” sort of way. Heaven’s, no. They’re catchy in a stop and listen sort of way, because that’s also Beyonce’s skill. She can deliver music that makes you want to stop and listen.

But the message of the album? Well, I’m not a fan.

Clearly there has been some hurt in Beyonce’s home life. Her lyrics about a cheating spouse are not, I believe, merely fictional. I don’t think Beyonce wrote that album as a creative exercise. It came from a place of experience; it came from a woman who walked through the fire of betrayal, and made it through to the other side.

For her strength, I applaud Beyonce. I’ve watched friends walk through the devastation of infidelity. It is a betrayal unlike any other to have your spouse turn away from you, and the only way to recover is to fight: Fight for your marriage, which I’ve seen people do and make it to the other side. Or fight through divorce, a sometimes heartbreakingly inevitable consequence of infidelity.

In a world that sees marriage as a dispensable commodity, I commend Beyonce for (apparently, based on her lyrics) fighting for hers.

Tidal, the production company that dropped Beyonce’s album, has described it as “a conceptual project based on every woman’s journey of self knowledge and healing.”

As women we are bombarded with the message that we are good enough and strong enough, and we don’t need any man to “complete” us.

Well, sure. There’s some truth to that statement. I’m raising my daughters to be strong, independent women because marriage isn’t a guarantee. I’m not looking to raise little Stepfords who can only function in the protective arms of a man. I want my girls to know they don’t need to find their self-worth in men.

But they shouldn’t be looking to find their worth in themselves, either. This is where Beyonce’s message of empowerment is not just wrong – it’s dangerous.

Take the following lyrics, for example: “Who the f*** do you think I is/You ain’t married to no average b**** boy/You can watch my fat a**twist boy/As I bounce to the next d*** boy/And keep your money, I got my own.”

Let’s set aside the terrible language for just a second, as if that wasn’t reason enough to caution girls away from Beyonce’s newest album. Let’s ignore that and simply focus on the meaning behind the words.

Is this really the message we’re applauding today? This is the anthem of strength we want our girls to emulate?!

If this is what raising a fire-breathing dragon looks like, then I’m kindly going to step out of the ring, and I’ll bring my girls with me.

[Tweet “Raising empowered girls in a “Lemonade” world is not so simple.”]

Raising girls who can stand strong in a world that tells them they’re nothing but sex symbols, now there’s the challenge. It’s such an oxymoron to listen to Beyonce sing while also watching her gyrate half-clad through most of her music. The message is conflicting: You’re good enough on your own merits, but your empowerment is entirely dependent upon your sex appeal.

Girls, hear me: You are worth far more than simply well-toned bodies.

It is a great honor and privilege to be a wife and a mother, but those things do not a woman make. Equally as important, however, is the understanding that strength isn’t dependent on your ability to wield and lord power over a man. Using sex as a weapon against your man? This is not a message we should be celebrating!

Strength isn’t elevating yourself above everyone else, particularly not over the men in your life. You want to show strength and beauty of character, young ladies?

Learn to let a man lead.

This is the beauty of womanhood. It is kind and compassionate, gentle and, yes, it is very, very strong. A woman’s worth doesn’t lie in her self-knowledge or her sexuality. Her strength does not reside in her ability to make men bow down at her feet and worship the ground she walks on.

Oh, no. A woman’s worth lies in the fact that she was merely created.

You are women created by God Himself.

It can only be lived.

Believing that they are worth more than they could ever imagine on their own, that “self-knowledge” is actually a myth, is the song I want to dictate their days.

This is the lemonade in a world full of lemons.