Hope Is Slow: The Story of Adoption: Part III

If I’m honest, (and I’m going to be), I have been waiting since day one for the bottom to drop out of this adoption thing. Every time an email showed up in my inbox from the adoption agency, I braced myself for the news that for whatever reason we would not be able to move forward.

There is trauma involved in a terminated adoption.

But every step of the process was smooth. It was like floating out on the ocean on a calm morning, the water smooth as glass all around us, sun warming our faces. Each stroke of the oar pushed us further along without the glimmer of a wave to hold us back.

It was a bit unnerving.

I knew it couldn’t possibly remain so smooth. It’s not just the unpredictability of adoption that threatened to shake us. It goes much deeper than that.

The battle for the life of a child begins at conception. Satan hates children. Their vulnerability makes them an easy target. Christ Himself esteemed children in a day and age when kids were not considered a commodity, but rather a property, good only for extra help around the home and the farm.

“Let the little children come to me, and do not hinder them, for to such belongs the kingdom of heaven.” Matthew 19:14

Children are the least of these. They are blessings and gifts, and they will always be in the crosshairs of the spiritual war we battle in this fallen world.

And the fatherless? Well, what better way for the devil to wreak havoc on a desperate and deprived world than to make sure children never find the security of a family?

Walking in faith toward adoption is a step onto one of the greatest heavenly battlefields, and there are bound to be repercussions.

[Tweet “What better way for the devil to wreak havoc than to keep children from the security of a family?”]

In the last few months, it has become more apparent to me than ever that we are under spiritual attack. From a hole in our roof that we can’t seem to get a roofer to replace, (we can’t even get anyone to call us back!) to a car accident, to tensions inside and outside our home, to a very bizarre glitch with the immigration code given to our adopted son that threatened to set us back months in going to pick him up.

I can easily wave all these off, pushing them aside as merely coincidental. We should have called a roofer months ago before the rainy season hit. I should have kept my eyes on the road instead of glancing at my daughter’s new ring. We just need to slow down and take a breath. That immigration coding issue could happen to anyone.

There is truth in all the above statements, and I’m certainly not one to look for the devil beneath every rock, but I also believe that satan wants to throw everything into chaos so that when we pick up our son, we are already worn down, beaten, stressed, and at odds.

We are on the bus, looking out both windows. Panic ensues. The world around us is in chaos, burning, tilting, crumbling.

And then someone hands us a child.

I think there are spiritual implications to my dream, and I’m not taking it lightly. I believe that the child represents our adopted son. Every time I held that baby in my arms, the panic and fear I felt abated. A calm washed over me, despite the fact that the world continued to rage.

Despite all the craziness that has been tossed at us these last six months, I don’t for a second doubt that Sawyer is meant to be our son. And so, despite the fact that water keeps dripping into my walls, my car is still in the shop, and the general feeling in life right now is we’re a half a step behind everything, I feel peace when I remember that this little boy is worth every battle.

Beyond that, it is apparent that the child in my dream is a representation of Christ Himself. The two are connected, our Chinese son and our God. Clinging to Christ is the only thing that makes the chaos less…chaotic.

We are in a battle, a war for the ages. Satan wants nothing more than to destroy this adoption, and why?

[Tweet “Adoption is a picture of Christ Himself. #adoption”]

There’s nothing special about our family. We aren’t better than anyone else because we chose to walk this path. We aren’t stronger. In fact, we feel anything but strong right now.

But though the world rages, though the battle grows fierce, though the waves rise, interrupting our smooth as glass ride, though the roof above our head lets in the rain, though the path feels unsteady, still we take tentative steps forward, obediently walking toward not just a call but a command.

“Pure and undefiled religion in the sight of our God is this: To visit orphans and widows in their distress, and to keep oneself unstained by the world.” James 1:27

In roughly two months, we will pick up our son. This isn’t the end of our adoption story.

It’s only the beginning… 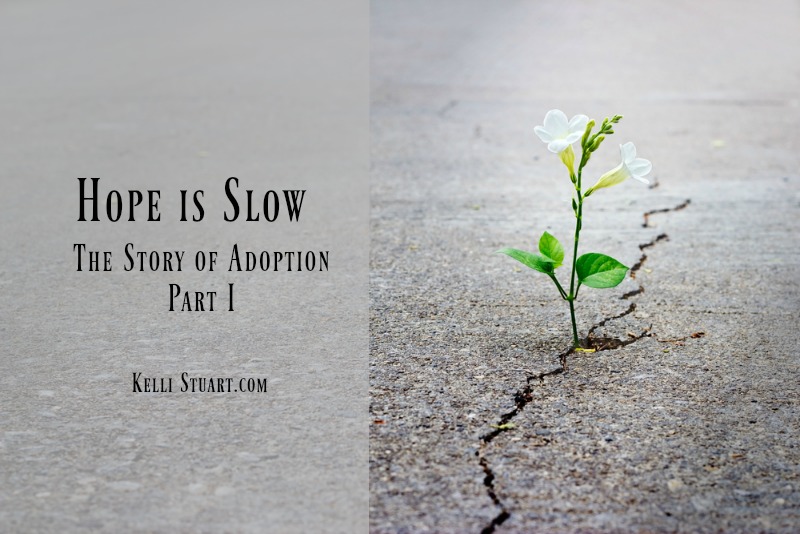