Lee and I circled the podium and, like everyone else around us, our eyes turned upward in awe. Mouths slightly agape, breathless at the sight of one of the greatest pieces of art of all time. We were in Florence, Italy and we were standing in front of the Statue of the David.

To say that this sculpture is impressive is an understatement. It is truly the most spectacular thing I’ve ever seen, and I think I could have stayed in that room for hours studying it. The marble was exquisitely crafted into the image of a man, but what made it impressive were the details. The sinewy muscles of the shoulders and legs stretched made it appear that at any moment, the man would step off his pedestal and begin walking.

Masterful art by a master artist. How did Michelangelo do it? How did he form something so spectacular out of a damaged piece of marble over 500 years ago? Could it be because the artist was also the art and, therefore, the creating was merely an extension of his God-given gift?

In response to Monday’s post, I had some really wonderful, thought-provoking conversation. Can an artist be a Christian without making Christian art? After a lot of thought, I’ve come up with what I hope is a worthy (and theologically sound) response.

The short answer is this: Yes and No.

If you look at the history of the Church, though, perhaps you will begin to better see what I mean. This idea of “sacred” verses “secular,” particularly when it pertains to art, is a modern concept. We began to draw a line of distinction between that which honored God and that which honored the world, and in so doing, we the Church (and in this case, the Church refers mostly to the Protestant Church) set up a false view of life and art, and ultimately of God. We began to claim and preach that anything that didn’t directly point to God, or speak of Him, did not bring Him honor and, therefore, art within the Christian realm was dumbed down.

A friend emailed me after Monday’s post with some thoughts on the matter and his words were good. Really good. I won’t embarrass him by sharing his name, but I’d like to pull a couple of quotes from his message:

“I think the dichotomy that sets [art] up as “intertwined” or “separate” is a false dichotomy. As Christians, everything we do takes place in a renewed, renovated, redeemed, forthcoming, there-but-not-yet, kingdom (on earth as it is in heaven). Therefore, there is no “separate,” as Christ is part of our identity, sealed upon rebirth. EVERYthing is intertwined. The gist of your point, though, on whether the art can be accessed within or without a (somewhat artificial) lens of “religion,” is merely one of public perception, and that’s one that’s changed substantially throughout history.“

If God is the  Creator, the painter of this world and all that is in it, the Word from the very beginning of time, the rhythm to which we sing, the measured beat of the poem, and if we are His created beings fashioned in His image, then in a very real sense all forms of creativity have the potential to point to Him. 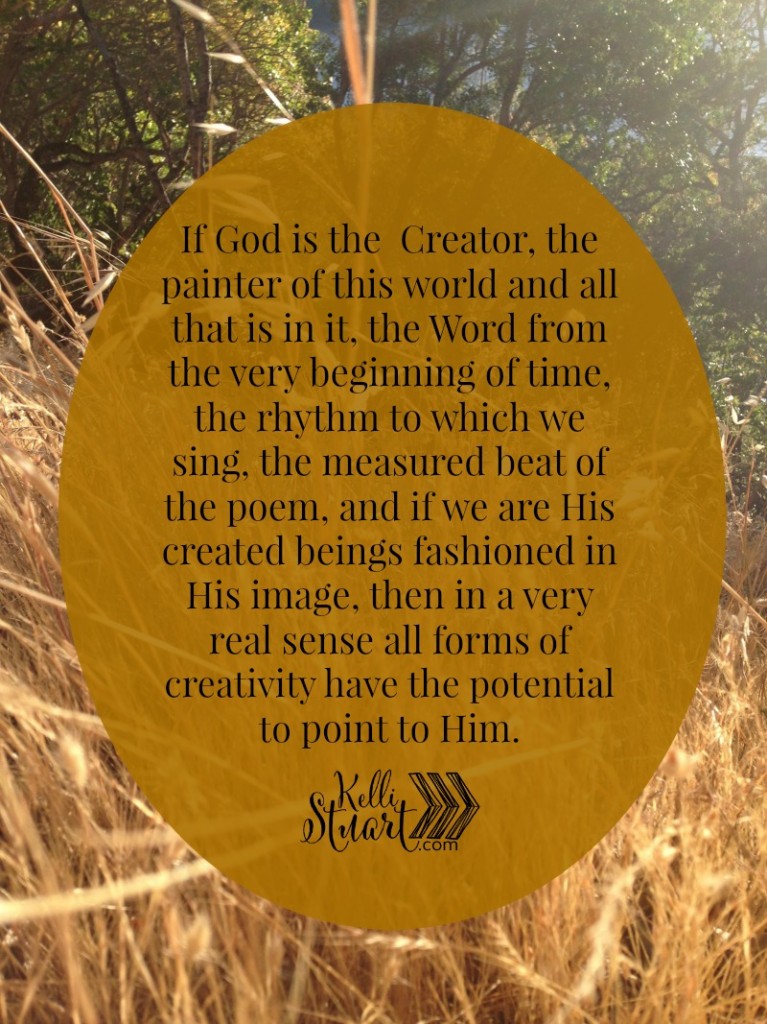 Do you see the beauty and the freedom in what we are discussing here? My friends, as his created beings, we are all the art.

“For we are His workmanship, created in Christ Jesus for good works, which God prepared beforehand that we should walk in them.” Ephesians 2:10

When Paul wrote that we were “His workmanship,” the Greek word he used was Poiema, meaning “made or crafted.” Friends, we as believers are the poem. We are the song. We are the beautiful painting. We are the handcrafted evidence of His Creative Power. We create because we were created.

What beautiful freedom to be found in this truth!

What does that mean, then, for those of us who create art that doesn’t explicitly point to God? This is a concept to be broken up in two different ways.

First, a believer can create something that reveals God without ever once mentioning His Name. It happens all the time. Paintings, photographs, novels, music, and so on – all of these can be written, and have been written, by Christians who used their creative gifts to showcase God, without ever once mentioning His Name. Faith and Art are intertwined, because the Poiema is simply living out the craftsmanship of God.

But art can be made that flies directly in the face of God. We can just as easily point to paintings, photographs, novels, music, and so on, that go against the very nature of who God is – so what do we do with this?

As believers we have been given the Holy Spirit, and through the Spirit we have discernment to know and understand and see that which does not bring glory to God. For this reason, I can still appreciate the art of a non-Christian as a revelation by God, though the artist may not have intended it to be such.

I can also discern when an art form is in direct contradiction with the very character and nature of God, and I can choose to look away. Not all art reveals God, because as sinful man our very first tendency will be to glorify ourselves.

But again, all forms of creativity have the potential to honor God.

If all of creation reveals the Creator, then creativity (as defined by the act of creating) will always begin with the potential to honor God. But…

There’s still so much more to say on the topic, so I will conclude this message in one final post. In the meantime, what are your thoughts? Feel free to share in the comments, or to shoot me a private message if you’re more comfortable with that.

The auditorium was packed, hundreds of literary hopefuls, avid readers, admiring law students, and simple fans all squeezed in together to hear one of the most respected and prolific writers of our time tell his story.

It was 2000, my senior year at Baylor University, and my eyes gleamed with all the hopes and potential of publication. So when I heard that John Grisham would be coming to speak on campus, I jumped at the opportunity to hear him. Lee and I were engaged at the time, so we went together and, randomly, recording artist Chris Rice was with us as well.

I can’t remember why he was there. I just know that he was, and really it fits because every bit of my history is peppered with random.

I loved listening to John Grisham tell his story. It took him three years to write A Time to Kill, and two years to secure an agent. The novel was picked up by a small publishing house who ordered only 5,000 copies printed. Grisham bought 1,000 of those and sold them himself.

Meager beginnings from a man who just had stories to tell.

At the end of his talk, Grisham opened the floor for a Q & A, and this started off nicely with students asking smart, respectful questions. Then one girl stood up and approached the mic.

“Mr. Grisham,” she said, “Thank you for speaking with us today. I noticed you spoke of your faith, and yet I can’t help but wonder why, if you believe yourself to be a Christian, you aren’t writing Christian books that are more God-honoring.”

And the entire auditorium groaned.

Grisham paused and looked closely at the girl, an amused smile tilting his mouth upward. He cleared his throat and leaned forward just a little before speaking. “Well,” he said. “The reason is simple. I am a Christian who is a writer. I’m not a Christian writer.” Then he straightened up, and the audience erupted in applause. 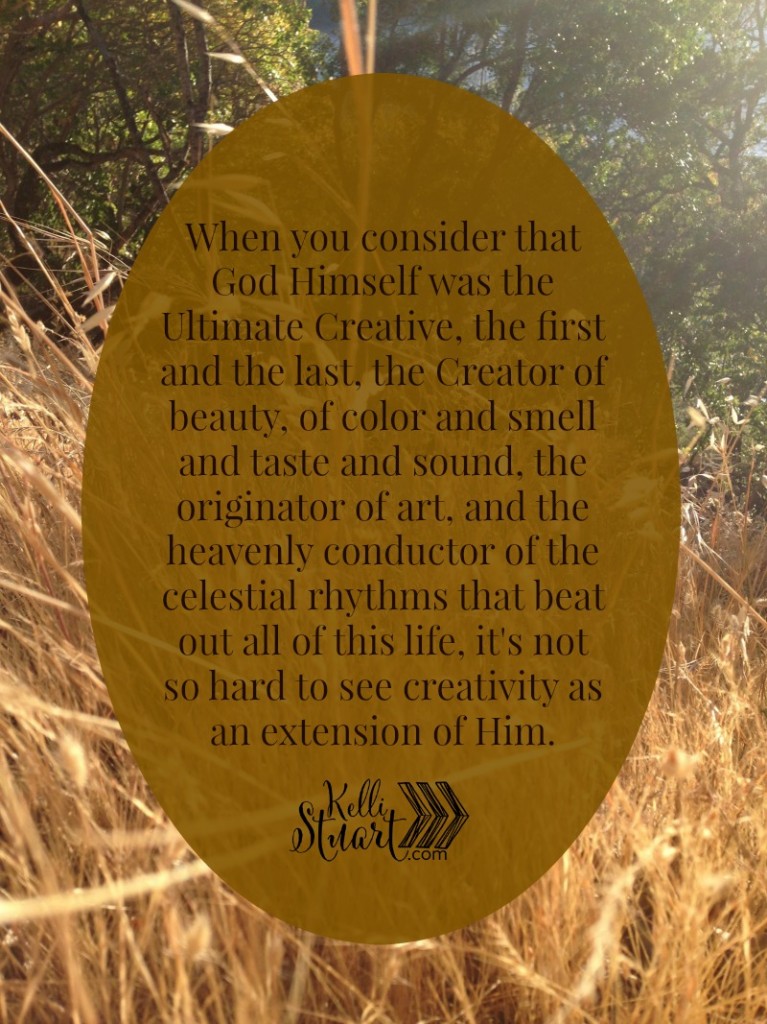 For the creative Christian artist there is a very real struggle with knowing how art and faith blend. For some, art and faith are obviously intertwined – you cannot have one without the other – and their creative genius spills forth in a visual gospel message.

But what about the Christian artist whose art doesn’t give a blatant visual representation of Christ in every stroke of the paintbrush, completed manuscript, or song penned beneath the candlelight?

Is there a place for creative Christians who aren’t producing overtly Christian work? Can art reflect faith without openly proclaiming Christ?

When you consider that God Himself was the Ultimate creative, the first and the last, the Creator of beauty, of color and smell and taste and sound, the originator of art, and the heavenly conductor of the celestial rhythms that beat out all of this life, it’s not so hard to see creativity as an extension of Him.

[Art] is useful because God is thereby honoured when it is seen that he hath bestowed such genius upon one of his creatures in whom is such art. All men will be gracious unto thee by reason of thine art.
Albrecht Dürer

For anyone who works from the creative realm, whether they be the obvious arts such as writing, making music, painting or sculpting, to the more obscure and modern arts such as decorating, photography, producing videos, cooking, or designing, it must be noted that they operate as an extension of God Himself.

The creative genius made in the likeness of the Creator.

Many of the greatest historical artistic works flowed directly from a place of faith and yes, the art often revealed that faith in very obvious ways.

As the world progressed, however, the arts began to change, and it seems that Christians lost their sense of just how to portray faith through the medium of creativity. Christian art became a means of proselytizing. It became less about revealing God and His goodness, and more about saving souls. The art was dumbed down in order to send a message, and in this dumbing down the created actually veiled the Creator.

So my question for you, readers, is this: Can great art still reveal the mystery of God’s goodness without being overtly Christian? Can a writer be a Christian without writing a Christian book? Can a painter still reveal God’s glory and goodness without painting Calvary? Can a musician still edify the gospel without singing about God? Can art and faith exist parallel to one another and still bring glory to the Creator, or should they intersect?

So whether you eat or drink, or whatever you do, do all to the glory of God.

Personally, I believe that art and faith are both separate and intertwined. Like John Grisham, I believe an artist can be a Christian without being a Christian artist, and can still unveil God’s glory as the Creator. But…

There’s more we could say on this topic.

I’d like to discuss this further in another blog post, but for now I open the comment section to you. What are your thoughts on the Christian artist vs. the Christian who makes art?