He delicately unwrapped the package, eyes wide with hopeful anticipation. When  he reached the end of the wrapping, he found another color paper spun tightly around the treasure.

He thrust his hand up in the air, triumphant. “Yes! This is the best birthday of my life!”

He turned twelve and we gave him a phone. He has his own phone number, a case, and the capability to text emojis. Basically, we made his entire life in one short night.

It was never our intention to give him an iPhone. It felt frivolous to do such a thing. An iPhone at 12?!

I DIDN’T GET AN iPHONE UNTIL I TURNED 35.

But we had an upgrade, and we had this working phone, and it actually made more sense to give him an old phone than to purchase a new one. But we don’t take the responsibility that comes with owning an iPhone lightly, nor do we expect him to fully understand the power, both good and bad, of the much coveted device.

And so we sat him down at the table, and we slid a paper across to him. There was a copy for him, and a copy for us, and we all read it together. 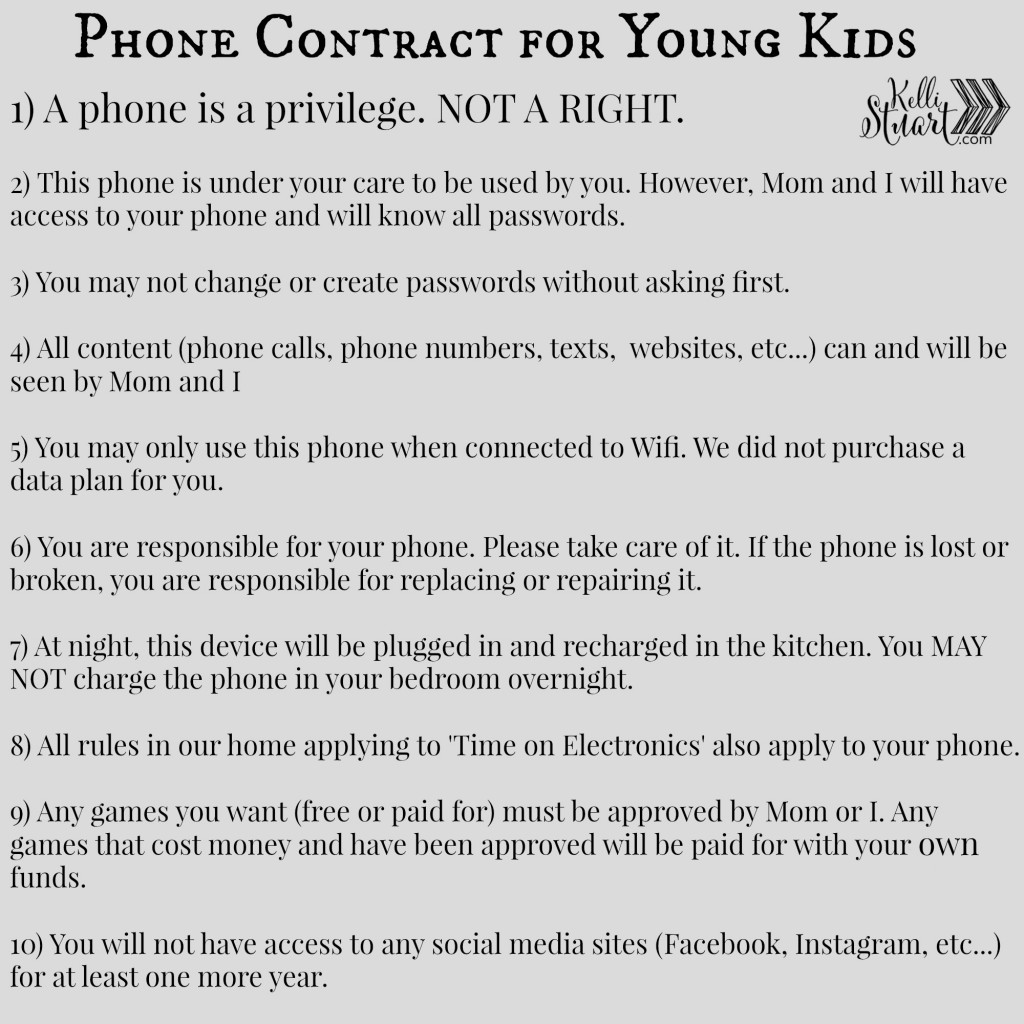 We read through the contract and talked with him about WHY. Why would we take the time to set these rules, and what were our expectations?

We made it clear that we’re giving him this phone because we trust him to have it. He’s twelve, and he’s old enough to begin handling more responsibility. But we would be foolish to just throw him a tiny computer without giving him some direction on how to use it.

After discussing the terms, and the agreed upon consequences if any term is broken, we all signed the bottom of the paper. This contract is active for one year. Next year, when he turns thirteen, we’ll reevaluate the contract with input from him. What worked? What no longer seems fair? We’ll give him a say, but we will have ultimate Veto Power.

Because we’re the parents.

My job as Sloan’s mom is to prepare him for the world, and the world he’s growing up in is a digital one. He has access to things I never did as a young kid, and a lot of that is good.

But there’s evil lurking in the wings.

Studies show that the percentage of young children being exposed, and becoming addicted, to pornography is on the rise. By age 18, it’s estimated that 93% of boys will have been exposed to pornography. And that’s a conservative estimate.

Between ages 12 and 13, 22% of boys are estimated to have been inadvertently exposed to pornography.

A smart phone in the hands of an adolescent is something to be watched carefully, because even if they aren’t looking for the danger, sometimes the danger finds them. An innocent YouTube video ends, and a graphic ones appears in the list. An ad pops up, which leads to a website and suddenly the a path is made available that can lead to devastating results.

There’s more than just danger to be wary of, though. We want our children to see that, although there’s benefit to having an electronic device, there’s much more benefit to living life in the present. Having a phone at arm’s reach is a temptation. Even I have to fight against constantly checking my phone.

It’s for this reason that we’ll wait another year before letting him jump into social media. There’s no reason to introduce the responsibility of a phone AND social media all at once. Because social media use will come with it’s own contract. Things like:

These are just a few of the things that we will be discussing with him over the next year as we prepare him for the responsibility of social media. But there’s no need to dive into those things now. Because for now, he still gets to be a kid, albeit a big kid. He still gets to enjoy the pleasure of real life, face to face interactions without having to learn the delicate art of online relationships.

[Tweet “In this digital age of fast paced living, children must learn the intricacies of the online world. “]

This is a huge responsibility for us as parents, and it’s not something we should take lightly. We’re the first generation to deal with raising such digital kids. No one else has done this before us.

So we’ll do the best we can to wade into these waters with our kids, one step at a time.

What about you? How are you helping your young children navigate these waters of digital living?