In five weeks, I will reenter a world I didn’t think I belonged. I was part of this world once, and I never felt like I fit in. I felt like a failed citizen amongst a world of accomplishments. This world was, for me, a bit stormy, wrought with feelings of inadequacy.

This is the world of homeschool.

I bought into that lie the first time I attempted to homeschool, and I skidded to a painful stop at the end of the year, certain that I was a failure as both a teacher and a mother because the year had been so difficult. So, why on earth am I doing this again? 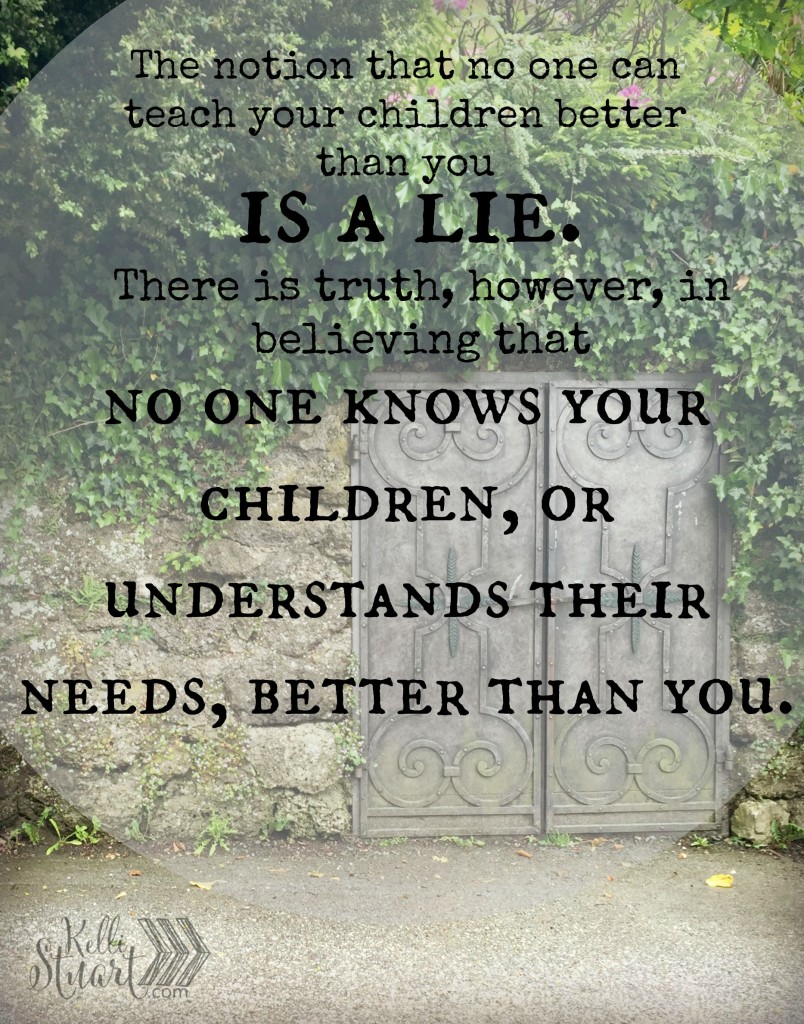 I’ve also had time to reflect on the year that we homeschooled, and to see some of the fallacies in my plan. I didn’t really set myself up for success. We were new in town, and we had little to no community. This meant I was going it alone in foreign territory.

In addition, the move caused some strain in our marriage as we worked through shattered expectations, disappointments, and anxiety over our decision to settle our family in a new state. Those strains did not help in the schooling process.

Finally, I simply didn’t know what I was doing. I was so terrified of screwing the children up irreparably (which is laughable now that I look back on it, given the fact that they were only in preschool, kindergarten, and 2nd grade at the time), that I woke up daily with my stomach in knots over the whole process.

I never planned lessons in advance, but lived the entire year by the seat of my pants. And when it was all said and done I was certain I had destroyed them.

I’m a little wiser this time around. I have a better grasp on the process of schooling my children, on the expectations that I need to have of them, and yes – I absolutely know them better now than I did four years ago.

I know their struggles and their strengths. I know what makes them tick, and what doesn’t motivate them at all. I know where to put my energy, and where to let things slide.

Here’s the other thing – I know this is right.

My daughter is skilled in a sport that requires a lot of her time. It is in my power to give her every opportunity to succeed in her gifting while still excelling academically. My own insecurities can be put aside for her sake, because I believe in her ability to excel, and I believe in my ability to teach her.

It’s also important to me that we see her on a daily basis, and going to school while training competitively as a gymnast takes away too much from our family. So sacrifices are made, starting with me. I’m okay with that. It took me awhile to get there, but I really am okay with it now.

My son is extremely smart, and I believe it’s in my power to challenge him beyond what a traditional classroom can so that he reaches his full potential. I believe in my ability to do so.

I’ve set measures in place this time around to make sure I don’t burn out or get lost in insecurity. Lee will be helping with math, and for good reason. I opened Tia’s math book last week and almost threw up because I didn’t understand the first page.

So she will attend a co-op where a skilled math teacher will teach the concepts, and her dad will help with the weekly work. Because there are people more skilled at teaching her in these areas than I am!

I’m setting plans in advance for what we will accomplish when, and how long we’ll work each day. And I’m choosing to believe that I belong in this homeschooling world, even if it’s still a daunting place for me to tread. I’m entering back in confidently, because I believe that right now, this is where we’re supposed to be as a family.

[Tweet “Educational freedoms mean I can give my children the opportunity to succeed in every area of life.”]

I’m grateful that I can give my children, and myself, the option to be the very best they were meant to be, whether that be academically, athletically, or simply as a growing young person.

And as the teacher moving forward, I am choosing confidence.