On Claiming a Title

When I graduated Baylor University with a degree in English Professional Writing, I immediately took on the title “writer.” That’s what I wanted to be, that’s the field in which I looked for a job, and so that’s the title I claimed for myself.

That one word feels lofty and even a bit snobbish. Writers are romanticized in movies and television. They are these deep thinkers who live in quirky apartments, and they wear funny sweaters and smoke cigarettes while tapping out the Great American Novel on rusty typewriters.

I don’t know a single writer who does any of those things, by the way. 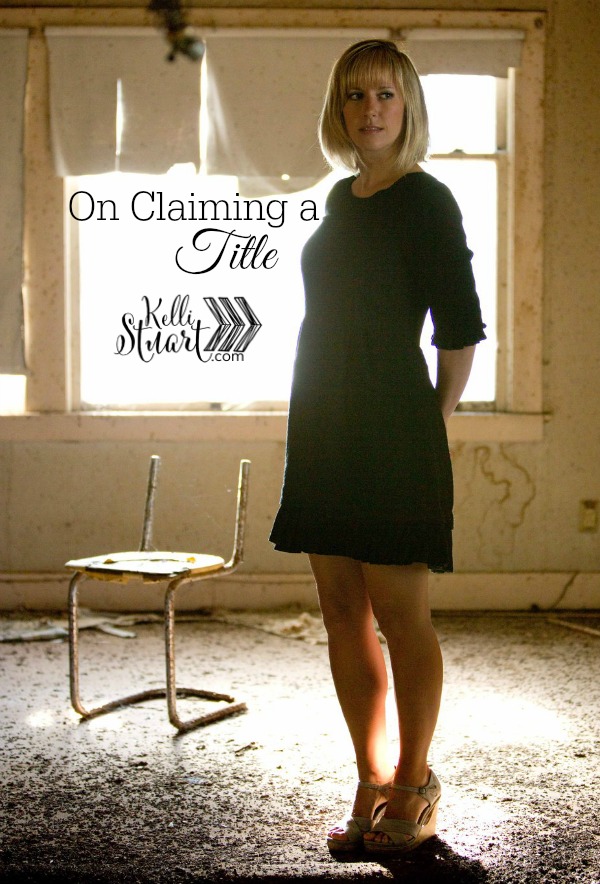 Most of us are tapping out our stories in the dark hours of our days – early morning, and late nights make up a world of stories. If you were to come to my house, you’d see that writing takes place in the cracks of life. During lunch break on homeschooling days, and on the rare gymnastics nights that I can slip away for a time and tap the keyboard while my daughter swings the bars.

There aren’t long stretches of time set aside for writing, because that’s just not the nature of my life right now. Someday there may be time for me to dedicate hours a day to my craft, but that day won’t come any time soon. So I fit it in, and I tell myself it’s okay.

Back when I was newly married, living in a small apartment in Frisco, Texas, I set to work proving myself to be a writer. I bought a clunky Toshiba laptop and set it up on the kitchen table, declaring that to be my space to create.

(I even bought myself a typewriter, with visions of romantic nights clicking away at the keys by lamplight. But it turns out that typing on a computer is much more productive, and a whole lot easier. Typewriters make lovely decorations, though.)

I interviewed for writing jobs in those early days, and landed a few freelance positions, and I considered this paying my dues. I ghostwrote a Study Guide, co-authored a devotional, and I wrote weekly newsletters for a local doctor, while also helping him formulate his ideas for a book series.

I did all of this while working on my own book, and I called myself writer, and I meant it. I was a writer because I wrote words.

But no one was reading the words, so I began to question my ability, and I slowly and quietly dropped the title. I began calling myself an editor, instead. I told people I liked to write, which seemed safer because how can you argue with that?

But I no longer felt comfortable calling myself a writer because the litmus test for being a writer seemed beyond what I had accomplished. I wasn’t publishing books, or even e-books. I had a blog, but it was a humor blog, hardly meant to be taken seriously.

Then I went to a conference that changed everything. I sat in on Jeff Goins’ session on writing, and he told us that part of writing is simply accepting the title for yourself. “It all changes when you’re willing to call yourself a writer,” he said.

So I accepted the title once more, and I tried applying it to myself, slowly at first. And then a little more boldly with time, until I finally came to a place where I believed myself to be a writer.

I even wrote an e-book about it.

It was then that I fell back in love with the craft of writing. No longer caught up in what I was and wasn’t doing, I simply learned to love the art. And I learned to better love my family in the midst of the art.

Taking on the title of mom, however, was never a problem for me. I believed in my ability to be a mom, and a good one at that, from the day my first child was born. It just felt so natural.

But being a Writer and a Mom? That’s a hard one. Because it’s hard to be both all at the same time. So I swing back and forth between the two titles, and the Mom title gets more of me, because of course it would!

Here’s the thing, though: I can wear both titles.

I am Mom. And I am a writer. I’m both things, simultaneously, though one outweighs the other in dedicated focused hours.

I’m also wife, daughter, sister, and friend. All of these titles rest upon me, and I’m grateful for them. Though I may wear some titles more naturally, and I may not always give healthy balance to each role, none are diminished or any  less important. I embrace all these titles, without shame.

What are your titles? How are you embracing all that you were made to be, from your mothering to your wife…ing (go with it), to the many, many skills that make up the whole of your being?

What titles can you claim for yourself?