What the…WHAT DID I SAY?!

Life is very full these days. From sun up to sun down, each moment of my day is parceled out in not so generous sums, and I’m slowly working my way to next Thursday when I will release all the strain, shut my eyes, and sleep for four whole days.

Lee and I leave next week for a much needed getaway. We’ve both been under pressure, me with two major book deadlines, and him with a hefty travel schedule. And in between all that we have these four little people who offer heaps of patience and grace (well, three of the four are offering patience. The baby is terribly demanding…).

And so it is that I stumble through each day, moving from one task to the next with little time to stop in between. This has, naturally, led to a bit of distraction, upon which my kids have capitalized and exploited in the most unfair of ways.

It seems they’ve grown quite thrilled with their ability to scare me. Normally it’s not that easy to make me jump because they’re loud, and they’re not really that good at waiting quietly in the shadows. Little giggles give them away, and so I’m usually prepared for their delighted BOO! I feign shock, and we all laugh.

But two things have occurred in the last few weeks: The first is the above mentioned distraction, which has left me vulnerable to attack. I’m all caught up inside my head, constantly sifting through all the thoughts that bounce around inside my overworked brain.

The second is that these kids of mine have become somewhat adept at hiding. I should be proud because they’ve really upped their game. But lately I find myself mumbling each time I round a corner, “If one of you jumps out at me I’m going to drop kick you into tomorrow.” 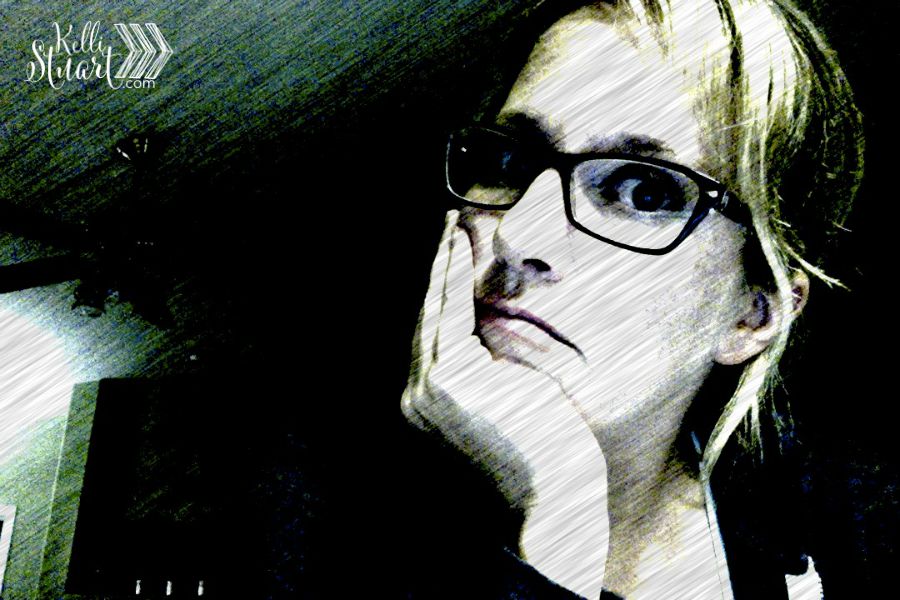 This little game of scare-the-pants-off-mom rose to a whole new level last week when Lee was out of town. After a long day, I put the kids to bed then headed to my bedroom where I spent an hour after bedtime cleaning up, trying to find my floor under all the clothes that had buried it.

Around 10:00, I made my way to the kitchen to grab a drink before closing down the house for the night. Just as I rounded the corner, Sloan stepped out from the shadows with a whispered, “Hey there!”

Friends, I’m not a cuss word kind of girl. In general four letter words do not fit very nicely on my tongue, so I don’t often say them save for very rare occasions. This was one such occasion.

I swung my fist through the air and yelped “AAAAAHHH – Whaaaaaat the H$#@!”

This was the moment that Sloan slid to the floor in laughter while I clutched my chest to make sure my heart started beating again.

WHY DID HE DO THAT?!

WHAT IS WRONG WITH THAT CHILD?!

These are questions left unanswered. And honestly, I blame his father for everything that is wrong with him, and all the other ones like him.

“Oooooh my gosh, that was SO funny, Mom!” Sloan squealed, rolling on the floor. He sat up and wiped his eyes. “I mean, I literally scared the H-E-L-L out of you!” he laughed.

“Not the way you used it,” he said, cackling now.

Since that day, it appears that the kids are on a quest to make my life a living H-E-L-L by jumping out at me at all times during the day, forcing me to prepare myself each and every time I round a corner. People of the world, I do not have time for these shenanigans!

This morning I got up early and let the dog outside. As I walked back into the house, Landon stepped from behind the curtains. “Hello,” he rasped in his little morning voice, and I screamed bloody murder. It’s really a testament to my INSANE self control that I didn’t end up punching him in the tiny little freckled nose.

He, of course, fell over laughing, then stood back up and wiped his eyes.

Join me next week for my online seminar: How to Be an Awesome Mom in Two Easy Steps.

Be aware that if you see me in public, and I appear to have a nervous tic, it’s because life and my psycho children are all conspiring to make sure I end up in an early grave.

Raising a Realist in a Dreamer’s World

“Okay, Tia,” the teacher said. “I want you to close your eyes right now. We’re going to play a game.”

I looked on as my daughter compliantly squeezed her eyes shut. We were sitting in the kitchen with a retired second grade teacher who is giving Tia a few tips and tricks to strengthen her reading comprehension. One of the things she noticed right away was that my daughter (a realist, and about as literal a child as they come) was not connecting the the text she was reading. 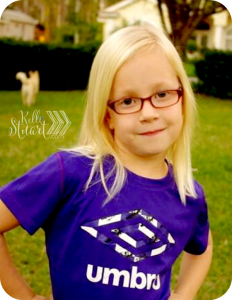 “Now,” the teacher said gently. “The characters in this story are named Bob, Tom and Jack. Tell me, Tia. What does Jack look like?”

Tia opened her eyes and looked at the teacher in surprise.

“Close your eyes,” the teacher reminded her with a smile. “I want you to use your imagination and tell me what you think Jack looks like. What is he wearing?”

“Uuuummmm…shorts and a t-shirt?” Tia asked.

“Okay,” the teacher said with a  smile. “What about Tom?”

“Uh…jeans and a long sleeve shirt?”

Tia squeezed her eyes tight and I could see her trying very hard to figure out this obscure exercise in imagination. “Um…a long sleeve shirt and shorts?”

That was the best she could do. This is my child who is not imaginative. She is not one to get lost in story, or to play make believe. She never has been that way – it is simply not the way she was wired. All of her play is centered around real life, or around stories she has heard before. She’s not one to make up her own stories, but rather will regurgitate that which has already been told.

I’m okay with this, though I confess that for a dreamer/imaginer like myself, it is sometimes baffling to watch her process the world. How did I end up with a child who can’t find a shape in a cloud, or close her eyes and imagine a world where the sky isn’t blue?

I’ll tell you how – I married a literalist, and she is just like her daddy.

I had to bite my lip from laughing at her that day with the teacher. She seemed entirely befuddled by this little game, and as I explained the nature of her personality to the teacher later, both of us agreed that she will likely struggle less with nonfiction books that fiction.

It’s hard to connect with a text when you can’t really see the pictures in your mind.

That’s not to say we won’t keep trying. It’s a necessary skill that I want her to develop, but it won’t ever come naturally to her.

Yesterday, she and I sat down to work on her reading. She pulled out The Magic Treehouse and slowly began to read. I stopped her after the first paragraph.

“Okay,” I said. “Let’s practice what Miss Eileen taught you. After reading this paragraph what picture do you have in your mind of Jack and Annie?”

Tia looking at me pointedly. “Yeah…that doesn’t work for me,” she said. “When I closed my eyes I could only see black. How am I supposed to know what Jack looks like with my eyes closed?!”

I love that child. I love the fact that she holds nothing back. It can be infuriating and baffling at times, but also a breath of fresh air. We always know exactly where she stands on an issue. If she doesn’t like something, she will tell you. She doesn’t have time to pretend to like it.

And please don’t ask her to waste time on fantasies. She has too many real dreams to pursue. Like this list of goals she wrote down yesterday. 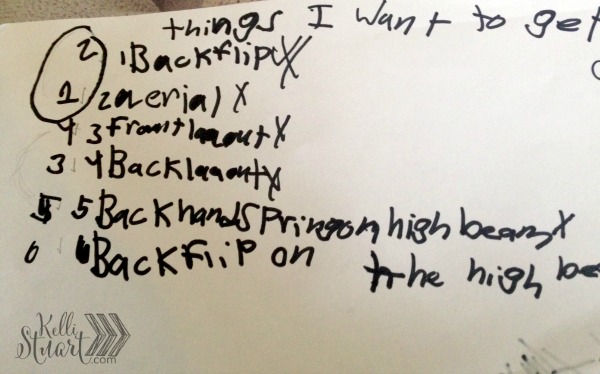 She’s still a dreamer, you see. Her dreams are simply steeped in the actual world around her.

She teaches me new things every day.