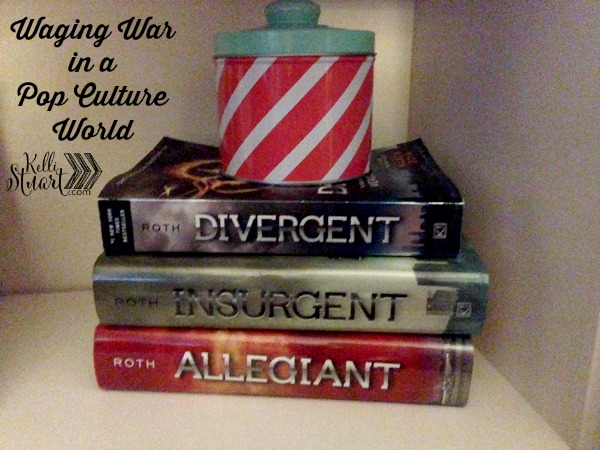 On the stretches of highway between Florida, Tennessee, and Arkansas, I devoured the Divergent series. Because I aim to stay a solid 18-24 months behind the curve of pop culture, I decided it was time to see what all the fuss was about.

Every hour and a half, my eleven year old leaned forward, his hot breath all up in my ear.

“Whatcha think of it, Mom?” he asked. “Can I read that series? All my friends at school have read it. Is it good? Would it be good for me to read?”

Round and round we went as I read, and he begged to follow me. About midway through Book One, I thought that maybe he could read it, or at least try to. He’s still not a strong enough reader for a book of that size, but it seemed engaging enough that he might be able to get through it.

By the end of Book Three, I was convinced that he would need to be at least sixteen before he could read these books, and even then it would be with a lot of dialogue. I had also decided that I would be more comfortable with him reading The Hunger Games trilogy before the Divergent series, namely because it is better written.

Besides the fact that I felt the Divergent series got entirely off track and confusing in its ultimate message (Just exactly was she trying to say?! There were roughly 15 potential themes covered in those books, and none of them were covered well. It was maddening and frustrating, to be quite honest), I also found the kissy-kissy relationship stuff to be over the top, over dramatic, and much too graphic for fourth/fifth graders. As I read through yet another make out session between Tobias and Tris, I couldn’t help but cringe and wonder if the parents who allowed their fourth graders to read those books last year understood the maturity of the subject matter.

We’ve had a lot of talks with our children about the necessity to protect and guard their minds lately. These talks need to start early as our kids are being exposed to more and more thanks to the onslaught of social media.

From music to books to television, our kids are introduced to concepts that are far too mature far too early. At least in my opinion. If my son is ready to dive into a fascinating and challenging series of books this year, I will gladly hand him The Chronicles of Narnia. While I love some of the Young Adult series coming out, I would rather expose my children to fine literature first, and when they’re older, if they’re still interested in reading these pop culture series, we can discuss which ones would be most worth the investment of their time.

I’m also a bit of a stickler about reading a book before you see the movie version. My kids love that about me…

Parenting is a battle. It seems that every day I am waging a war against pop culture, and the conflicting messages that culture sends to my children. I’m fighting too much exposure to the online world, too much screen time, the lyrics of popular songs. I’m battling against a world that tells them to grow up young, that tells my daughter her worth is found in how she dresses (and looks in clothing). Television shows emasculate men, while music demeans women.

This isn’t to say that we’re hard core limiting what they see and hear. On the contrary, we allow quite a bit of freedom for our children to see and hear things in this pop culture world. We don’t want to put them in a bubble. But we do want to teach them that just because something is popular doesn’t mean we need to be exposed to it.

The fact is, my kids are not ready to hear all the messages the world has to offer. They are not adults living in tiny bodies. They’re children learning to navigate their way through this world. And pop culture is not the voice I want dictating who my children become, how they think, and how they behave.

I want to challenge them to be deep thinkers, to have minds of their own, rather than to be tiny robots easily controlled by the next popular books/song/movie, etc…To that end, I’m taking my job as guardian seriously.

What are your thoughts on raising children in a land dictated by pop culture?