Made for the Light – Part One

There was a little girl I once knew whose entire life was an empty stage, and she knew in her heart she was the one meant to fill that space. The hall echoed with waiting spectators, but she couldn’t see who they were, for the glare of the spotlight left her blinded. So she shielded her eyes and stood center stage, waiting for her cue.

She waited a long time, and the more she focused on the auditorium, the better she was able to block the glare of the spotlight until it sort of faded into her periphery. That was when she realized – the seats were all empty.

She stood on a barren stage, in an empty performance hall, with nothing but a spotlight to keep her warm. How terribly downcast she felt about the whole ordeal.

Dejection tried to push in, but the girl quickly convinced herself that she had only to begin performing, and then people would come watch her. So she started, loud and bold.

“COME LOOK AT ME!” She cried out in her most dramatic voice, each word inflected with a sense of purpose.

“YOU WANT TO WATCH ME, BECAUSE I WAS MADE FOR THIS! THIS IS MY STAGE! ISN’T IT GRAND?” 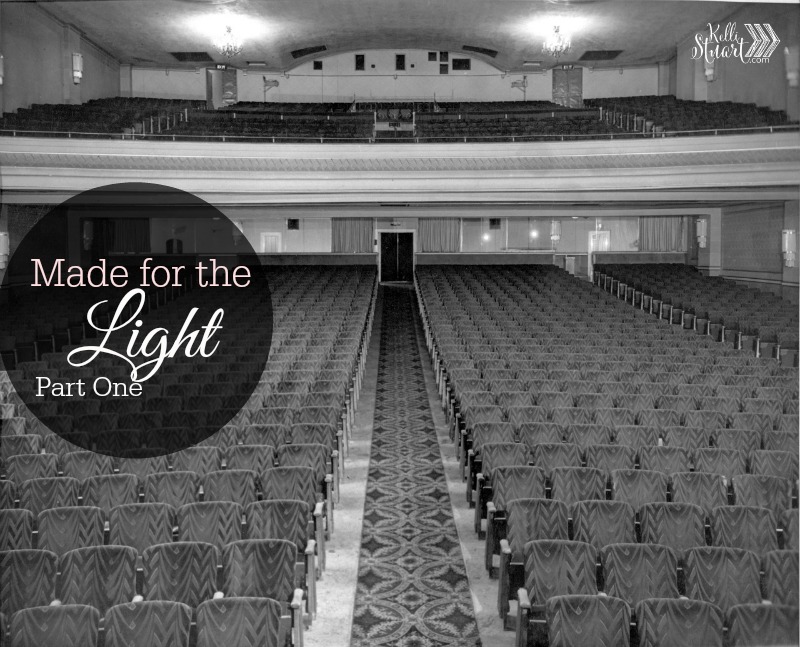 And a few people trickled in. Some sat in the front row – they were her family – and they clapped the loudest and most enthusiastically. She liked that.

A few more came, and the girl squinted through the spotlight to see a seat fill up here and there, and so she raised her voice again.

As she shouted her monologue, more people came, but some also left. It seemed they were a fickle crowd, willing to come and go, and so the girl pulled back and looked around. And that’s when she noticed hers wasn’t the only stage in the room. In fact, the auditorium was filled with stages.

Some were quite large, much more so than the girl’s. And the ones who stood on those large stages had lights, and music. Some had lasers, and even back up dancers. The girl felt very small and inadequate next to those large stages.

But there were others, she noticed, who had smaller stages than her own. Some of those on the small stages stood nearly motionless with arms pinned to their sides, timidly speaking, their whispers drowned in the noise.

But some on the small stages spoke quite eloquently, and the girl noticed that people were listening and watching those speakers. They were illuminated by nothing more that the spotlight, and she felt compelled to incline her ear toward these strong speakers on the small stages.

The girl looked back out toward her own audience, and suddenly realized they all looked bored. Well, all of them except those sitting in the front row. They always looked proud.

And then the girl couldn’t remember her story, or why she stood on that stage in the first place. So she sat down, put her head in her hands, and began to weep. No longer a girl, she had grown into a woman, and she found that being on the stage wasn’t where she wanted to be. She was tired of trying to be heard.

She wanted to be in the audience, comfortably choosing which speaker to follow. So she pushed to her feet, and decided to leave.

Only she couldn’t leave, for the stage had grown around her. It wasn’t a cage, but she found there were no steps on which to descend. She was meant to stay up there. But why? And for what?

Turning circles on the platform, the girl tried to make sense of it all. Finally, she turned back toward the audience, but she couldn’t see them, the glare of the spotlight having grown increasingly bright. For a brief moment, she quit looking for the people and allowed herself to be warmed by the light. And that’s when she knew.

The stage wasn’t hers – it never had been.

And the story wasn’t really hers to tell. All of it belonged to the Light, and in the Light. She wasn’t there to be seen, but to reveal the Light. The audience wasn’t warmed by her performance, or her words – they were warmed by the Light alone.

So she stepped forward, this time more humbly, and with much more trepidation. Lifting her chin, she turned her face toward the Light, and with a smile she held her hands wide.

“Come see this Light,” she cried, in a hushed and hallowed voice. “I was made to show you this Light. Isn’t it Grand? This Light is for you, too.”