Technicolor Memory – On Life and Travel 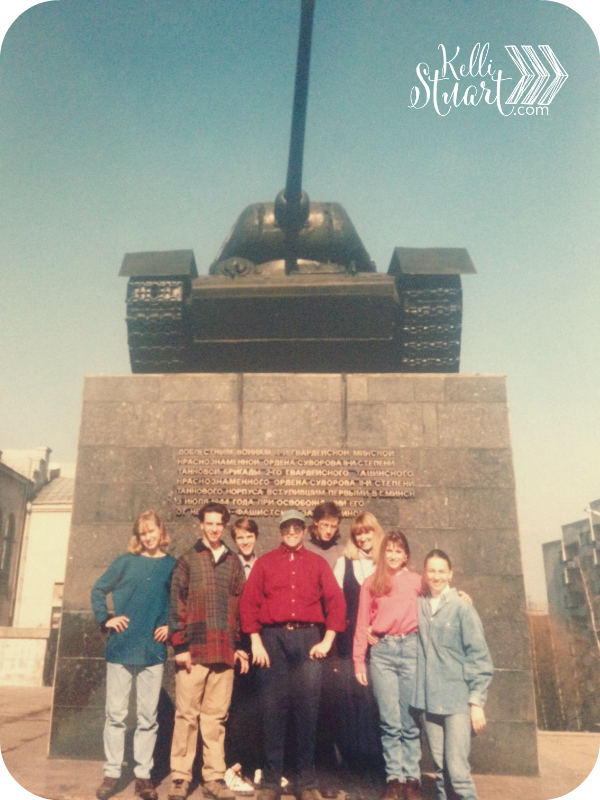 We were a rag tag group, a gaggle of teenagers, most of whom were leaving US soil for the very first time. It was 1995, and the dust was still settling from the fall of the Iron Curtain.

“Don’t get over there and be loud and obnoxious,” our leader advised us before we left. “Show them that American teenagers actually do have some self control.”

We tried to do this, and most of the time we succeeded. We avoided squealing and shouting over every new experience, although being tricked into eating cow tongue on our first night in Minsk, Belarus was just short of a cruel introduction into this strange new land.

The smells are what I remember the most. That and the cold. When we stepped off the plane onto a frigid tarmac, the sky around us was grey. For a brief moment, I felt as though we’d stepped into a black and white film as the grey pavement extended into the grey horizon in such a way that made all the land before us seem devoid of color.

As we entered the concrete terminal, I listened closely to this foreign language. It was the first time I’d ever heard Russian, and the words sounded like poetry. At least that’s the way I remember it. At the time, I know I was a little shell shocked. Jet lag combined with an awe and fear of the unknown didn’t leave me much time to ponder the poetic nature of my current reality.

I just remember feeling like I knew that place.

For two weeks we toured the land, and as I remember those adventures, the landscape slowly fades into this technicolor memory. It lights up as I explore the moment that I first learned who Lenin was, and what he had done. It bleeds into the first moment I stepped into a Russian Orthodox church, and realized exactly what the word “history” means.

Suddenly 1776 no longer seemed that interesting to this All-American girl. Not when I was confronted with the stories of a land that dated back  to 1067. I couldn’t even fathom the amount of story that the buildings I stepped into held.

The world changed for me on that trip. I stood in Red Square in Moscow, and I looked at St. Basils, and I had no idea how to process the world as a whole. When I walked through Lenin’s tomb, and viewed the body of a man both hated and revered depending on who you spoke with, I couldn’t wrap my mind around my smallness in this world.

All I knew was that I wanted to see and experience more of it.

Lee and I have been talking a lot, lately. Dreaming, really. We dream of exposing our children to more of the world, of opening their eyes to their smallness in this great, big land.

I’m so grateful to my parents for encouraging me to experience life to the fullest. I’m so thankful that they saw the importance of travel, and that they not only allowed me to explore this globe (usually without them), but they generally pushed it. Without their willingness to let me go and experience life through travel, I wouldn’t be who I am today.

Our kids are still young, and there are some boundaries within which we feel like we must operate as a family, but we have dreams. We dream of showing them the world, of giving them a taste of it now, while they’re young. Our biggest, most-unlikely-but-still-fun-to-discuss dream is to someday live overseas for a time. I don’t know if that will ever happen, but we do love to imagine the possibility.

And when the time comes, we’ll give them whatever nudge they need to step out and explore on their own…hopefully with a little more wisdom than I showed in my solo travels.

We’ve started the process of exposing them to the world outside the United States, and we have hopes, dreams, and loose plans to do more traveling with them in the coming years. As we do this, I pray that there will come a moment for each one of them when the Lord gives a coming home moment – a slice of time that will serve as a technicolor memory.

I can’t wait to see how they use those memories in the future.

(These thoughts have been spurred on by Tsh Oxenreider’s book, Notes from a Blue Bike. If you haven’t read it yet, I cannot recommend it enough.)

Tell me your story. Have you had the chance to expose your kids to new experiences through travel, either inside or outside the country? How have you done this, and how has it impacted your family?