More Than Just Soldiers: Wisdom From the Front Lines

This is the second installment in my four week series honoring the Ukrainian men and women who fought for their freedom in World War II, or “The Great Patriotic War,” as it is referred to in Ukraine.

Today’s story comes from a man named Oleg Dimitrievich. I met him at a local school one afternoon in Kiev after I finished speaking with a group of students. He heard what I was doing, and asked if he could tell me his story. 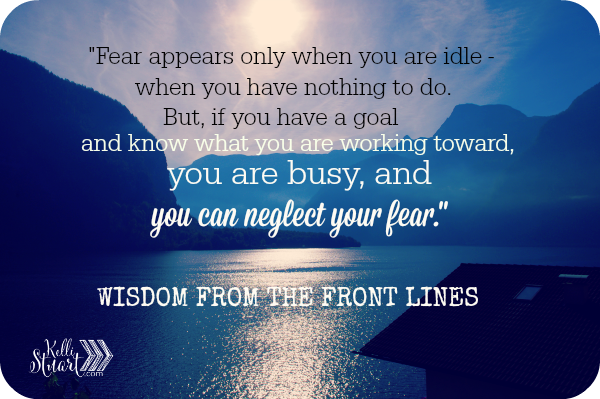 I will never forget this man. His hands were weathered and rough, nervously ringing his hat as he recalled the memories that haunted him. He told me his story with tears coursing down his cheeks, and he wanted to make sure that I understood that the men and women who fought in this war were more than just soldiers.

You must know that I and my comrades, we were all just ordinary people.  We were not special.  We were just young men and women doing our job.  The battalion I took part in was a fine battalion.  We fought hard for our country.  We were good men – learned men.  Many of the men loved to write poetry.  We were deep thinkers and philosophers and singers.  We were more than just soldiers.”

Oleg Dmitrievich remembered those days of war with raw emotion. He described the heat of the bombs, and the sounds of the bullets as they buzzed by his head. Out of 600 men in his battalion, less than 50 survived.

This is his story:

I was a simple officer in the Great Patriotic War.  When the war began I was still studying in college, so I did not join the front until March of 1942.  I was 23-years-old at the time.

I would like to tell you my impressions of the war.  You see, my memories of that time are not just stories, they are realities.  The deaths, the battles, the bombings – they are all real to me.  You are just listening to these stories, but I was living them.

You must understand that many people in my country have covered up facts about this period of history.  For many years, people have tried to cover up their shame by burying the truth beneath a mountain of propaganda.  We have hidden ourselves from the truth.

And what is the truth?  Many people do not know that when the Germans first appeared, people in our country, especially those in small villages, accepted them.  They thought that perhaps Germany had come to liberate them from the Soviet Rule.  They thought it was the establishment of a new Revolutionary period.  So, as the Germans marched into the villages, people threw them candy and sweets.  They listened to the German songs and tried to sing along.  This was hard for those of us fighting the war to see and understand.  We felt betrayed by their acceptance of the very people we were trying to overcome.  This is the truth.

There is one particular episode that stands out vividly in my mind.  It was late in the afternoon, and I had somehow gotten separated from the men in my battalion.  I was walking down the road, unsure of where I was when I saw two Soviet soldiers sitting on the side of the road with their backs to me.  I thought that perhaps they were sleeping, but I needed help so I decided to disturb them.  I approached and asked for directions but received no response, so I gently nudged one of them.  It was then that I noticed that they had no heads.  This was a terrible shock.  This was life on the front.  You never knew what horror each day could bring.

In 1944, I took part in the liberation of [the town of] Kam’yanets Podilsky.  It was difficult there.  Kam’yanets Podilsky was a small town surrounded by rolling hills.  There was a large bridge that crossed a deep gully.  This bridge was old and beautiful.  It led to the old fortress.  This fortress is one of the most remarkable sights in our country.  Through determined fighting, the Soviet soldiers had managed to save that fortress from complete destruction.  But they could not keep the Germans out completely.

The Germans had taken control of this town and were monitoring the main bridge.  We worried that we would not be able to usurp them.  So we decided to trick them.  We waited until night to begin our attack.  We shined our tank lights down upon them as bright as we could, so they were unsure of whether we were enemy tanks or their own tanks.  Then, our division rushed forward, and somehow, through that simple trick, we were able to retake the bridge.

After this time, I participated in the liberation of Lviv.  In Lviv, we faced an battalion of Ukrainian rebels called the Banderovtsy.  They were an ugly, terrorous people.  We did not know about them before we got to Lviv.

(Sidebar: The Banderovtsy were a group of men and women who fought zealously under their leader, Stepan Bandera.  Their sole aim was to see Ukraine become an independent nation; therefore, they often fought not only against the Germans, but against the Soviets as well.  There is a great divide between Ukrainians as to whether the Banderovtsy were patriotic soldiers or ruthless killers.  In Western Ukraine, the Bandersovtsy are often hailed and remembered with pride.  But elsewhere, they are often shamefully scorned.)

At one point, we found ourselves in a small village outside of Lviv where wounded soldiers were being treated.  I do not remember the name of this town.  There were thirty-one people in this village when I arrived, and we wanted to evacuate them to a hospital.  I left one morning to get a car to send for the wounded, but by the time I returned, all of them had been slaughtered.  The Banderovtsy had been there.  This was terrible.

We were always on edge during this time of war.  We never knew when an attack would begin.  Fear mounted only in the still moments of the night, when we had nothing but our thoughts to keep us company.  During the day, we did not have time to fear.  You see, fear appears only when you are idle – when you have nothing to do.  But, if you have a goal and know what you are working toward, you are busy and you can neglect your fear.

This was my experience in the Great Patriotic War.  I feel it is a pity that we had to fight this war.  It seems it should not have happened.  But I am grateful that I took part and helped lead this country to victory over the fascists.  We fought to the victory!”