On Nighttime Fears, Peace, and Birthing a Squid 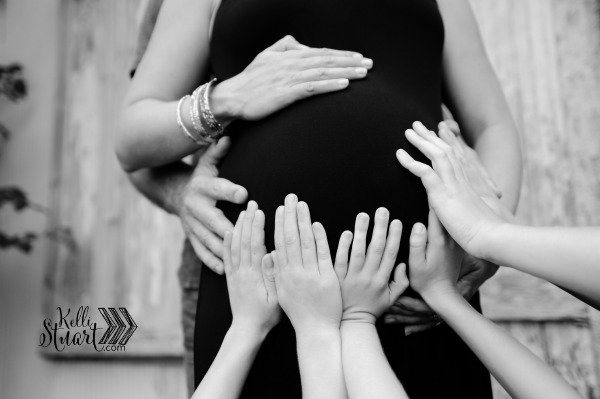 As we close in on the due date, sleep is naturally elusive. Thanks to the heat, I am swollen and uncomfortable, and I am apparently carrying a tiny little radiator because I cannot cool off to save my life.

Incidentally, I also told my midwife yesterday that I think I might be carrying an octopus because I swear there are eight legs kicking me from every single angle in there. She was a new midwife. She doesn’t get my humor. She told me I probably wasn’t carrying an octopus.

With sleepless nights come some unreasonable emotions. Being that this isn’t my first rodeo, I know what to expect, and I am offering myself a little bit of grace these days as I prepare to bring our baby girl (octopus?) home.

The other night, I woke up at 3:30. This is par for the course, but as I tossed and turned, a nagging worry began rolling through my heart. It bubbled soft at first, then quickly grew until I was in full blown panic.

Usually I wake up because the baby is playing Tetris in my ribs. This time, however, I noticed that I couldn’t feel her moving. She was very still, and that is unusual. Suddenly the silence of the night and the darkness that surrounded got the best of me, and I feared the very worst.

I never worried about losing a child in utero with my other three. Of course I knew it was a possibility, but I didn’t exercise a lot of mind power on thinking about it, because I didn’t really think it could happen to me. I also had never read a blog, nor been on Facebook the first three times I was pregnant.

I birthed my first three children in the dark ages. We were still using film (FILM!) when Sloan was born.

In the six and a half years since I last had a child, I’ve read countless heartbreaking stories of families losing children late in their pregnancies. It’s much more of a reality to me now and, naturally, more of a concern. I know I don’t need to worry, but again, darkness and fatigue are a wily combination.

I finally got up and drank a little orange juice, then pushed on my belly a little until I felt her shift. She’s not moving as much as she used to due to the fact that there is no more room in there. The Inn is full! It’s time to move on, little one. Thankfully, the shifting set my heart at ease long enough to let me go back to sleep. But the fear was waiting for me when I woke back up.

Having already walked with my older kids through a terminated adoption, I feel more emotion than I know how to communicate at the idea of them experiencing another loss. It nags in the back of my mind, and as I wake each morning I have to lay all those fears to rest. Already, before she’s even born, I’m relinquishing the control over her tiny little life. She is not mine, but merely a gift from God. I will trust Him, and I know I will continually have to lay down this fear throughout her entire life.

I know, because I have to do it with the other three.

I know, because I still pray for the little girl sitting in an orphanage in Russia who had a family ready to meet and love her.

Part of being a mother is dealing with the natural worry that comes with the territory, and with the onslaught of stories passed down through social media, we’re faced with the reality of those worries on a daily basis. So each day begins with a prayer for their safety, and with the relinquishing of control, because I am not in control.

I spent a little time in her nursery this morning. It’s peaceful in there. The colors are soothing, and the room is clean (for now), which makes it the only clean place in the house (for now).  As I sat on her bed, I felt her shift and move again, and I was grateful for the reminder that all is well, and I am not in control.

God has been Gracious and Merciful to our family over the last three years. They have been hard years, but He has been faithful. I am trusting in His Grace and Mercy to bring this little girl (squid?) into our family safely (and soon! Oh please, soon!). So when the darkness closes in, and the world becomes still (too still), I will embrace the knowledge that He is Gracious, He is Merciful, and He is in Control.

And I will quit complaining when she jabs me in the ribs, because that feeling is evidence of the blessing.