Do you remember being in awe of nature as a child? Did you ever sit beneathe a black-blue sky dotted with a milliion stars and gasp at the wonder of it all? Did you marvel at a sunset or watch the clouds float by in an array of shapes.

An alligator! An elephant! A one-legged dog!

I remember specifically being around nine or ten years old and we had gone on a camping trip to some Jellystone Park in somewhere Wisconsin. While my parents worked hard to crank open the pop up camper, my brother and I romped in the wooded fields around us as the sun sank lower beyond the trees. And then we both stopped and gasped.

The glow of the moon lifted above the treeline before the moon itself appeared. It was huge and orange and seemed to hover just above the ground, willing us to reach out and touch. I wanted to step forward and cross the expanse of sky to enter the golden, shimmery world that seemed to be just steps away.

As a roaring fire cackled and we prepared to bunk down for the night, I stole continual glances at the moon, which continued to rise up above the Earth, the orange hue fading and morphing into a brilliant white. A diamond in the sky.

I remember the magic of that moment, and it’s not the only time the moon’s nearness has stopped me in my tracks. I love those nights when the moon hovers just above the earth and gives us a closer glimpse of the light that God placed in the night sky. 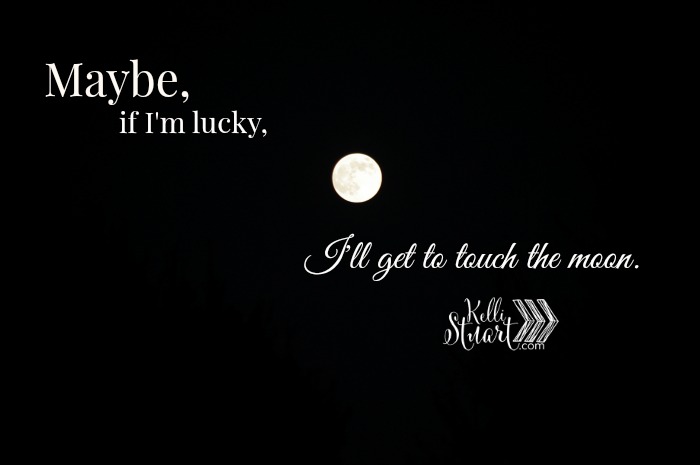 This month has been a hard one. I’ve felt so small and insignificant, so very far away from all of life. I haven’t even had time to stop and observe the moon, to see if she hovered nearby. There haven’t been moments to pause, to try to grasp the weight of everything happening around me.

Tomorrow I am putting “K” on a plane. I will tell her goodbye, then make my way home from Atlanta where I had to drop her off. For seven hours I’ll be alone in the car. Will that be the time to try and take in this whirlwind of a month – this time when everything changed permanently?

Maybe. I’ll try. But mostly I feel numb right now, so there is a part of me that wants to just put on the ’90’s station and sing it out. A little Mariah Carey, Allan’s Morisette, Boyz II Men, and Goo Goo Dolls could be just what the doctor ordered. And yet…

I know at some point I’m going to have to really dig into where I’ve been this month. It’s been a doozy, and as I continue to feel the sadness, I also feel joy and excitement. I’m looking forward to this year with great expectation, despite the fact that it begins with great disappointment.

So tomorrow I will drive through the day, and as I roll into town, the moon should be ascending to her perch in the sky. And I’ll be looking for her, reminding myself that as the world continues to spin and another day comes to a close, there are so many things for which to be thankful.

I’ll remember, and I’ll feel the sadness and the joy, and I’ll let both emotions find a place inside my heart.

And maybe, if I’m lucky, I’ll get to touch the moon.