A Space to Inspire

A few months ago, Tia and I discussed what she’d like for her birthday. She’s growing increasingly more difficult to give gifts because she is entering that awkward stage between little kid and teenager and, truth be told, she’s never been much of a toy kid anyway.

I hate spending money on gifts that they don’t really love, so I tossed out the option of redoing her room as a birthday present and she immediately said “Yes!”

Then I died a little inside because me and decorating are not the most compatible of companions. 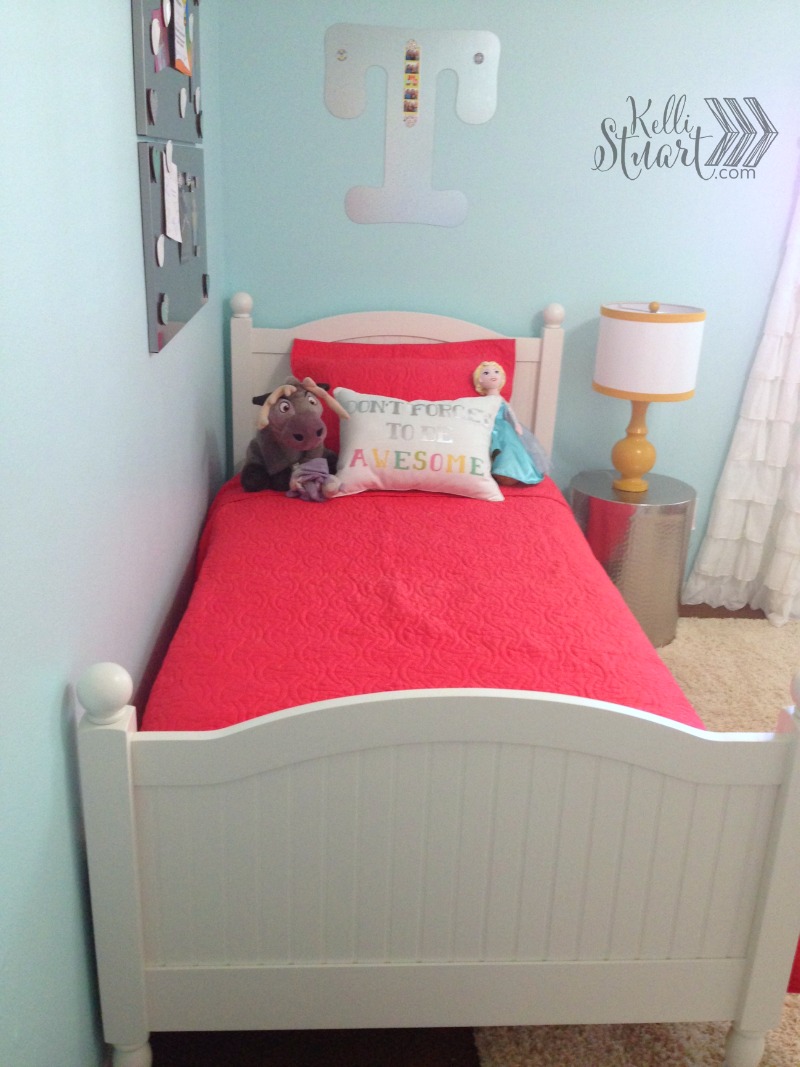 The “T” above her bed isn’t crooked. It’s just the way I took the photo. Because I’m awesome like that.

A few days before her birthday, I realized that if we were going to remake her room I had better get on the ball. So I bought a couple of cans of paint, called in reinforcements (thanks, Jenni!), and the transformation began. 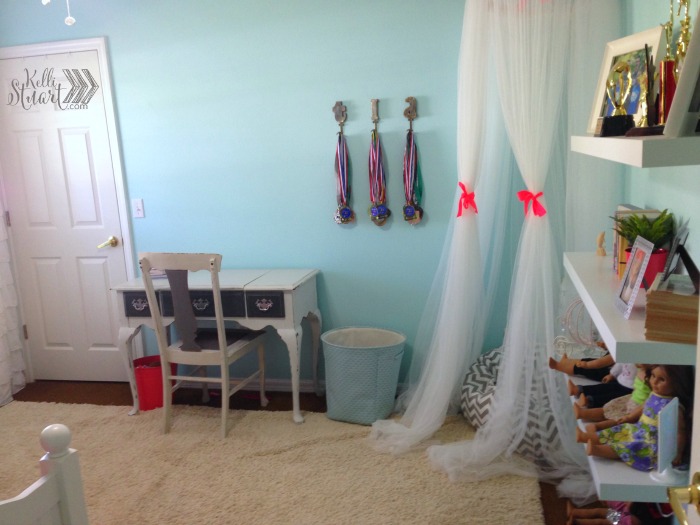 The wall color is Benjamin Moore “Jack Frost” and it is my very favorite of all the colors. I’d paint the whole house this color if Lee would let me.

I let Tia sit down and surf Pinterest, then we created her own board so that I could get a feel for what she would like. I hoped to create a space that inspired her since this is the child who is much more prone to realism than imagination. I wanted her room to be a place that she could escape and enjoy. And I wanted her to be able to grow into the space rather than grow out of it again in a couple of years. 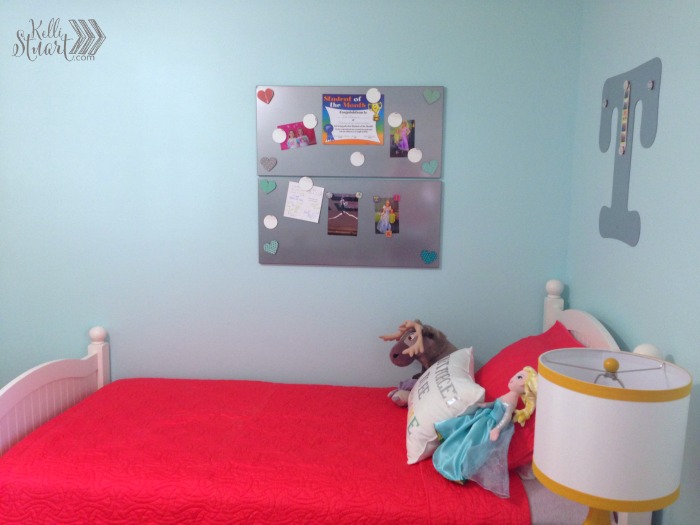 The magnetic boards were another IKEA find and she loves that she can decorate the wall herself by moving pictures and cards and magnets around.

I could not be more pleased with how her room came together. She has a small space, so I really tried to utilize it well. I put a small dresser in her closet, and I got rid of all the clothes she doesn’t wear, which left her with fewer clothes and more space.

I’m totally fine with that. 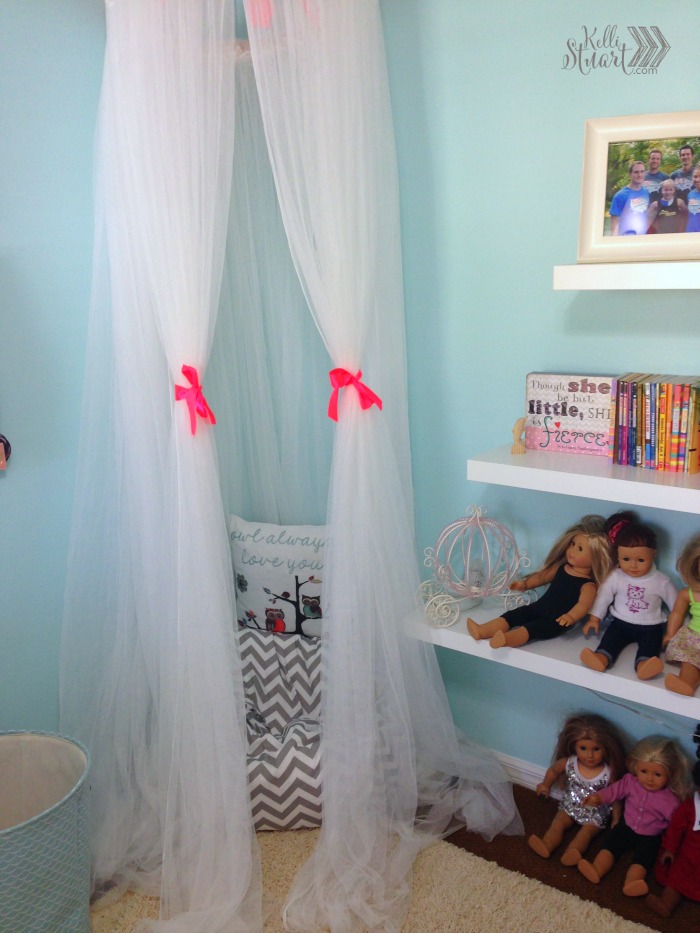 Makes you want to curl up with a good book, right?

I made this little canopy tent all by myself (ALL BY MYSELF!! ME! I DID IT!), and it cost me less than $25. Here’s the tutorial if you want to make one. It’s embarrassing how easy it is. I probably shouldn’t be as proud of myself as I am, but I can’t help it. I’m not a DIY girl.

You remember what happened the last time I tried a Pinterest DIY project, right? How I got attacked by Tracker Jackers and almost died?  Yeah… 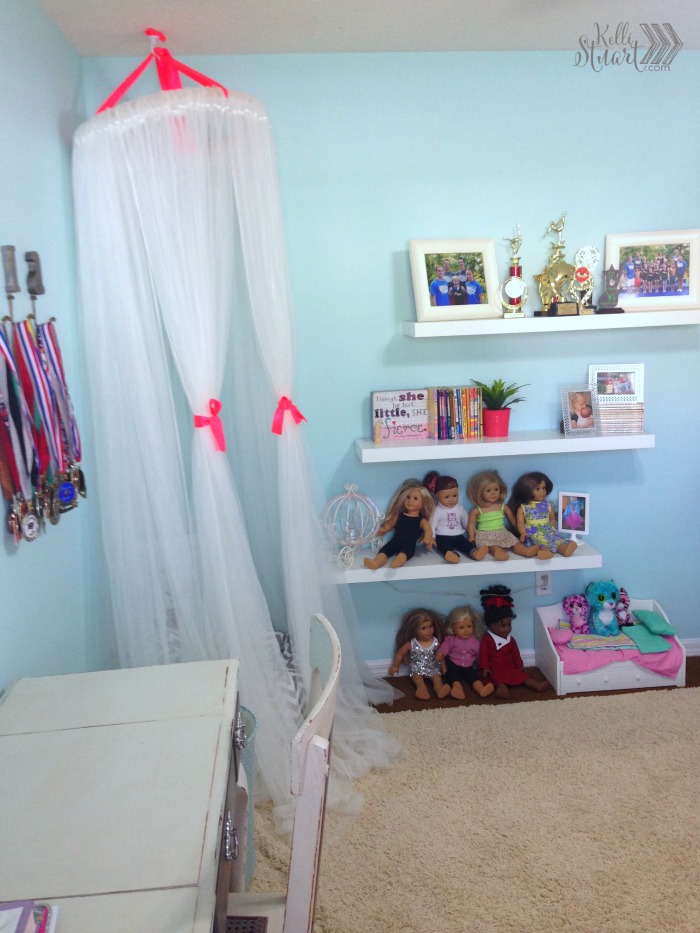 Tia loves her room, from the IKEA bookshelves, to the reading corner, to her antique vanity that her grandparents gave her for her birthday. The room is calming and sweet, and I do think that it will leave her inspired to dream a little more. It has now officially become my favorite place in the house. Sometimes when she’s at school I go in there to read.

Don’t tell her I said that. 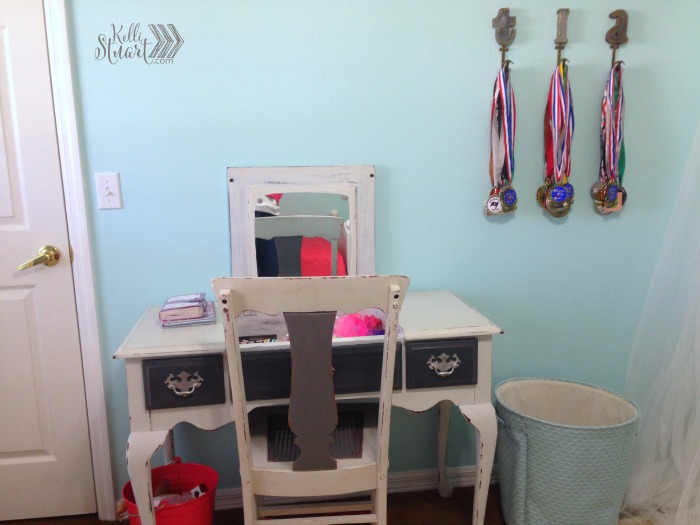 When the whole room was finally finished and put back together, she walked in and her eyes grew wide. “Wow,” she cried. “I love it! It’s so pretty I just want to keep it clean all the time.”

If that happens, then this just might become the miracle room. I’ll keep you posted…