When No is the Only Word You Hear

I work in a profession that requires thick skin. I put my heart out there, tapping each beat to the rhythm of my keyboard, and I hand it to a friend, an editor, the world via a blog post, and then I wait for the feedback.

I learned to accept criticism in college. My senior year, the class Writing for the Popular Market would be the training ground for giving and accepting constructive criticism.

That was also the year that I began to associate editing with coffee. But that’s a different topic for a different day.

Once a week, my classmates and I, along with our professor, sat in a circle in the local coffee shop, or on the couches in the room above The Sub, and we’d dutifully hand the ten pages we’d written in our novels that week to the person sitting just to the right.

Then we’d sit back, sip our coffee, and read one another’s words.

There were only six of us in the class, and by the end of the year, we each had a completed manuscript. This would be the first draft of my novel. It was the beginning of learning to communicate through story.

I’m grateful for the lessons learned in that small class. I’m glad I learned to hear someone criticize what I wrote, and not take it personally. It’s a necessary skill, and it’s one that’s served me well over the last fifteen years since I graduated.

When I shared the news that my novel would be published last week, I received so many wonderful, encouraging messages and comments from all of you. And I cried a lot as I read through them, because fifteen years of waiting and dreaming of seeing this book published suddenly took a realistic turn. 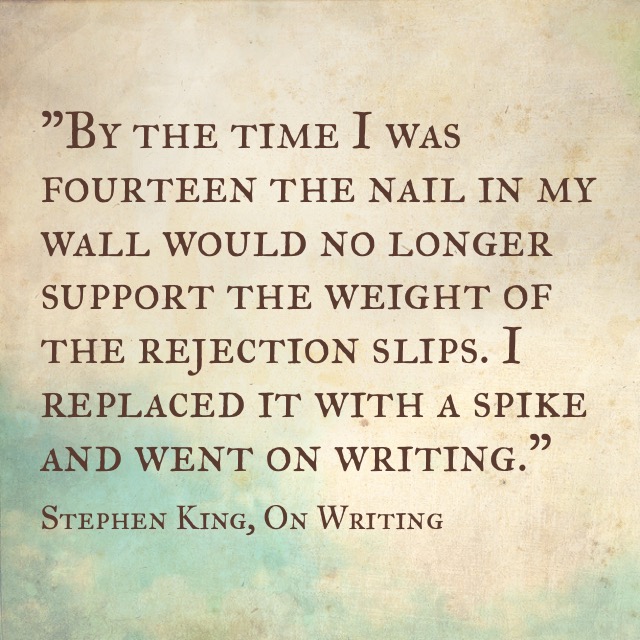 [Tweet “There is a refining power in rejection. It either makes you, or it breaks you. “]

See, when I started the process of trying to get my book published (an earlier version of it that is nothing like the one coming out next spring), I did it the old school way. I mailed letters – actual letters written on paper.

I sent query after query in the mail, along with book proposals and sample chapters. And I included in each stamped envelope, a Self Addressed Stamped Envelope (SASE) for the publishers to send me his response…which was usually a big, fat no.

Every once in awhile, though, there would be a glimmer of hope. A note, scratched at the bottom of a form letter from the editor encouraging me to keep writing.

Those rejection slips went to the top of the pile.

I tossed the folder of rejection slips when we moved, because I was over the romanticism of it all by then. And the world had moved on to email, so now I had the privilege of receiving electronic form letters, and that felt a little less nostalgic. I wish now, though, that I had that stack of “No’s”

Because I’d love to see it dwarfed next to the contract that says “Yes.” 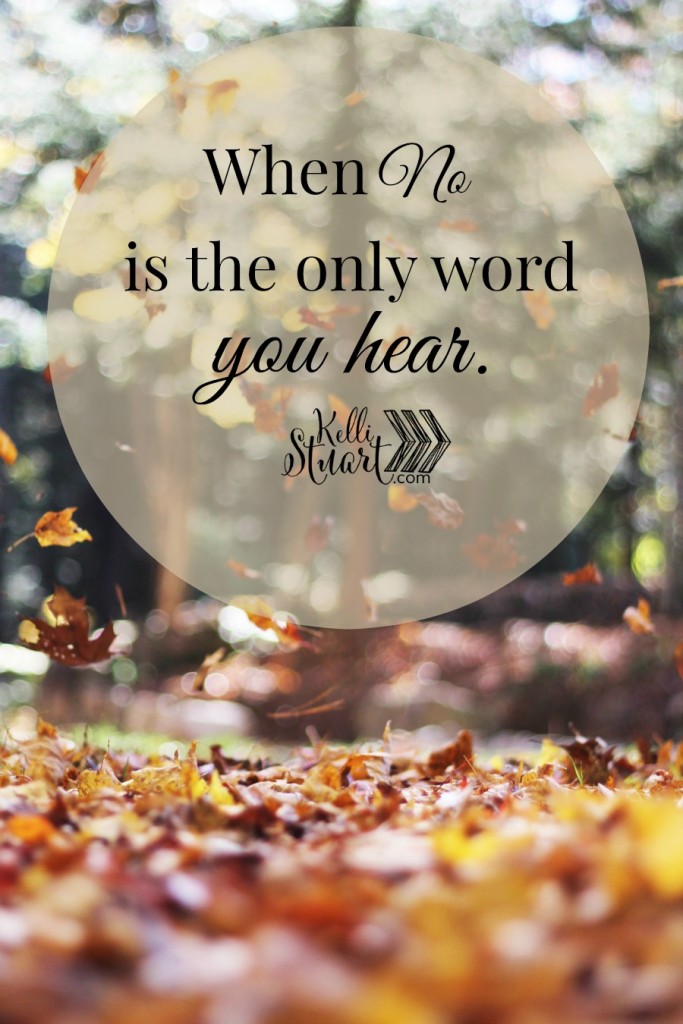 I haven’t really minded all the rejection, if I’m honest. I’ve been impatient at times, of course. And there were days when I’d feel terribly discouraged over it all. But in all the years of waiting and hoping, it never occurred to me that I should give up on the book.

There are some stories that just get under your skin, and this story that I’ve written is one of them. The characters crawled into my very being, and I knew that someday I’d see them really come to life in print.

So I waited, and I pushed, and I simply refused to take no for an answer.

[Tweet “Rejection doesn’t mean the end of a dream. Rejection says you’re on the right track.”]

If you’re in a place where “No” is the only word you’re hearing, can I just urge you not to give up? Sometimes you have to wade through a whole lot of “No” to get to “Yes.”

And when that happens, you’ll find that the “Yes” is so much sweeter after the waiting.