Swingin’ in the Rain

Yesterday was a rough day.

After a week of steady rain, attitudes and annoyances all rubbed up tight against one another to form the perfect storm of insanity inside our home. From the moment the day began, the small people in our midst were clawing at one another’s throats.

You know how little baby tigers play with each other, tumbling around, nipping at one another’s ears and pawing at each other’s faces, and you wonder if they’re fighting or playing?

It was just like that here, but they were definitely fighting.

Even Lee and I felt the stress of a long couple of days, griping at each other in frustration over silly little things. And so the day went with all of us tired and annoyed, and feeling a little trapped.

Not to be outdone, Annika got in on the insanity of the day. Somehow she managed to fall over backward on the hard tile floor four times. By the last tumble, I was exasperated as she wailed and screeched. I was ready to sell the house, and move into a home made of rubber and foam, in a place where it never ever rains, and children never argue, and you can eat all the Nutella you want without repercussion.

If I’m going to dream up a utopia, it’s going to involve Nutella. Amen?

After dinner, the kids asked to watch a movie, and I was tempted to say yes. It would keep them quiet, and meant I could disengage almost completely. But somehow I knew that sitting in front of the TV was the wrong response. So did Lee.

“We’re going to the park,” he announced, and was immediately met with groans.

The list of complaints went on and on. We ignored them and ushered our little tigers out the door and into the grey outdoors.

There was a break in the weather, so I plopped Annika into the stroller and walked her the half mile to the park where Lee met us. As soon as we arrived it started raining again, and my frustration level hit a high note. 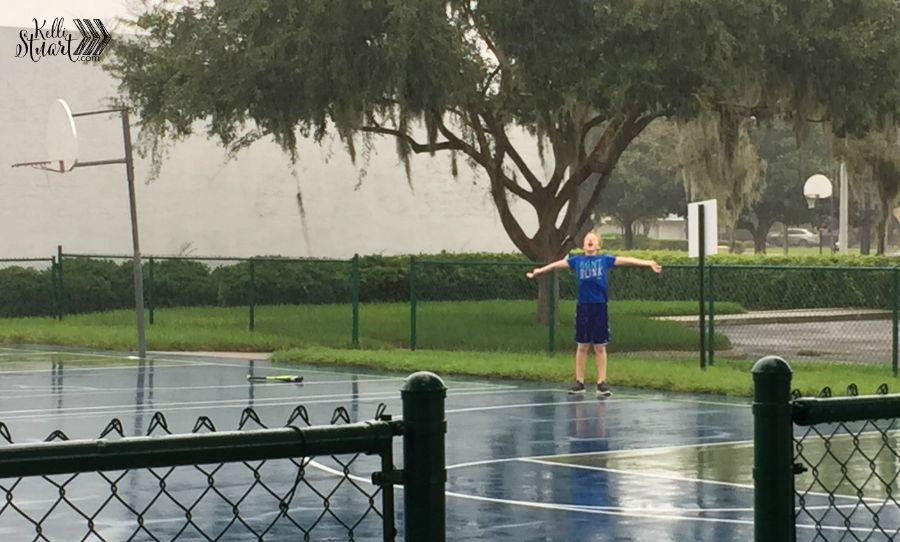 WHY WITH ALL THE RAIN?!

All we wanted was a little free space to spread out – couldn’t God hold off the rain for thirty minutes so we could regroup? I expressed my frustration in a whispered prayer to the Lord.

And then I stopped. Because it was silly to feel frustrated over rain. I knew that it was. Besides, it was more of a steady mist, so why not make the most of it? 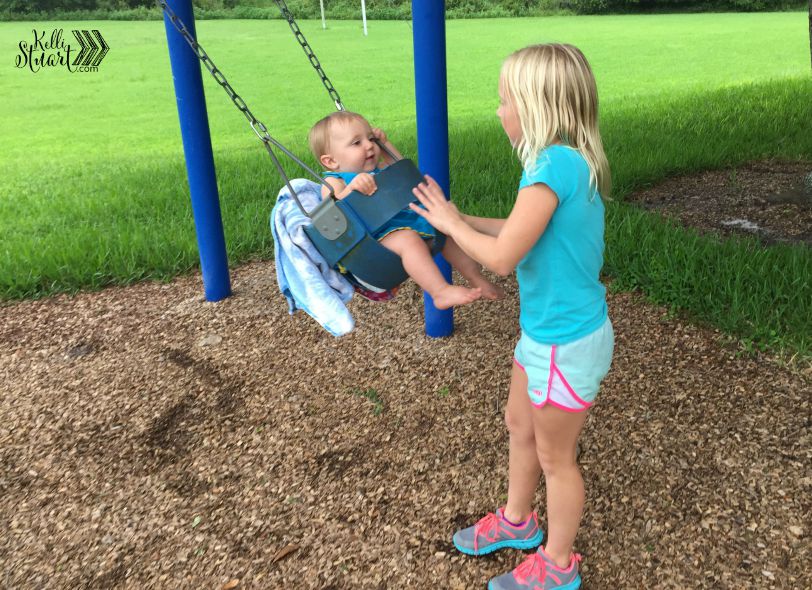 While the boys hit the tennis ball through the misty air, the girls and I headed to the swings, and it was there that I found a glimmer of hope at the end of a long day.

As Annika moved back and forth through the weepy sky, her face lit up and giggles erupted. Tia laughed in return, blonde hair slowly growing damp as the rain cleansed us all of the anger that had followed us to the park. 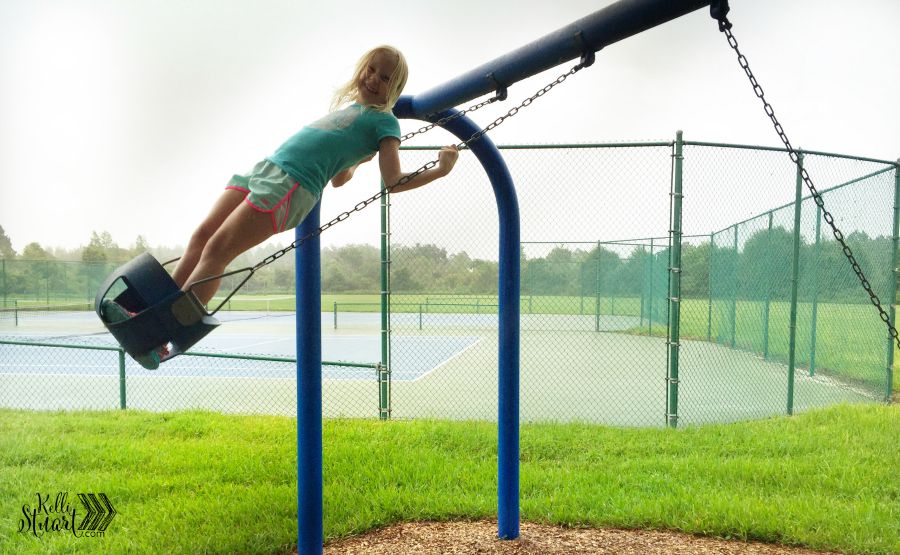 For twenty minutes, we played in the rain. Even the dog enjoyed herself, wandering freely off her leash in the field behind the playground. It was exactly what we needed, and isn’t it funny how water can do that? Cleanse and renew? It’s always that way, isn’t it? And so I was reminded:

[Tweet “When life offers a rainy day, you can either lament, or swing high into the rain. Choose to swing.”] 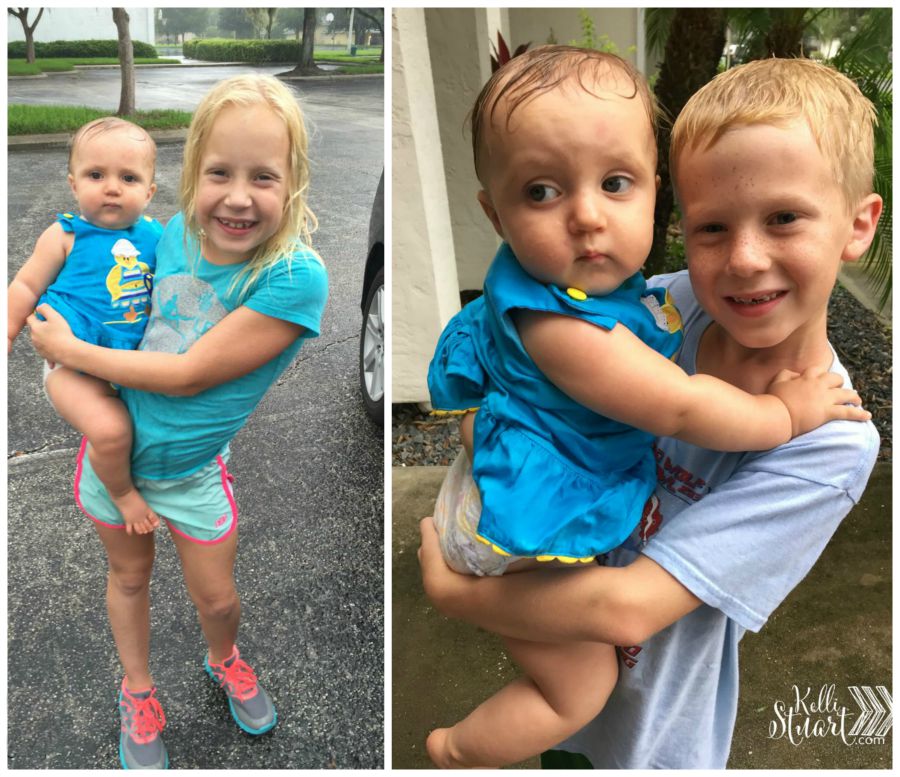 As we drove home, all damp and a little chilled, I found myself whispering a prayer of thanksgiving for our opportunity to play in the rain. It wasn’t the way I wanted it to happen, and it didn’t solve all the frustrations of the day.

But once I changed my perspective, I found that the rain was what we needed all along.

The goal now, of course, is to keep that attitude as it appears it’s not going to stop raining here in Florida for the foreseeable future.

Send a lifeboat. And Nutella. And maybe a little wine if you’re so inclined.