I both long for it, and resent it. Everything about my life is safe, and for that I am truly thankful. I’m free to move about as I please, and so are my children, and there are moments when I truly, genuinely do not take that for granted.

But there are more moments when I do take it for granted.

Like everyone else, I have been captivated by the photos of a little boy washed ashore. I think about his parents and their longing for safety, and the journey they took that was anything but safe, and my heart breaks because it was just so hard.

I think about the family who recently brought home a little girl from a Chinese orphanage, and they now sit cocooned in their home because they need her to know that they aren’t going to leave her. She’s barely two, but she’s conditioned to believe that everyone leaves, and so they must build trust. And how many children are living that way in this world?

I think of the young woman in Ukraine who spent the last two Christmases with us. She wants family and safety. She wants to be known. She wants life to be easier.

And then I think of my own children swimming in opportunity, and I worry that I’m failing. We have a house bursting with “stuff.” So much stuff. It’s cool in the summer and warm in the winter, and we have enough clothing to last us at least a month, maybe more, if needed.

Food piles in the pantry and fridge, but still I run to the grocery store almost daily, because I can. And because these people in my house eat like it’s going out of style.

We’ve tried to expose them to the suffering of this world, but as they bicker over who gets to play the PlayStation next, I fear we’ve done a poor job.

We took them to Walmart on Monday armed with a list of needed and necessary items for Syrian refugees. Our sole purpose in the store was to purchase for others, not for ourselves. And yet, in every aisle they asked for something. We reminded them over and over, gently at first, and then with more urgency, that this trip wasn’t about us – it was about suffering people.

But even I had to restrain myself from grabbing a few things for our family while there.

We brought all the items home, and they’re piled in the corner waiting be boxed.

“That’s really not that much stuff,” my oldest said last night as I pulled it all out and began organizing it. “How many refugees are there?”

“Thousands,” I replied. He raised his eyebrows.

“That will only help a couple of people.”

And so it is that my heart constricts again, because this box I’m putting together feels so small. I know that for the three or four people who benefit from it’s content, the gesture won’t be small. But this feels like a single drop of rain in a vast desert. Everything feels so small.

A solitary box fill with clothes and shoes is small.

Bringing “K” into our home for two months is small.

$38/month for our sponsored children is small.

My children live in a world that is bursting with need, and I do know that they’re aware of this – they’re not clueless. Nor are they indifferent to the suffering of others. In fact, when given the opportunity, they are more gracious and giving than I am.

But it all feels so small.

I placed the sweatpants and tennis shoes, socks and underwear in the box, and before closing it up laid my hand on top of it and prayed.

“Lord, multiply this offering so that it isn’t small. This isn’t enough, Father. But it’s something – it’s a start. Make it sufficient, Oh God.”

My one box is small, but it’s something. It’s a start. And maybe if we work together as a collective whole we can make that offering a big one. Like the loaves and the fish, the offering can be made sufficient for the masses. 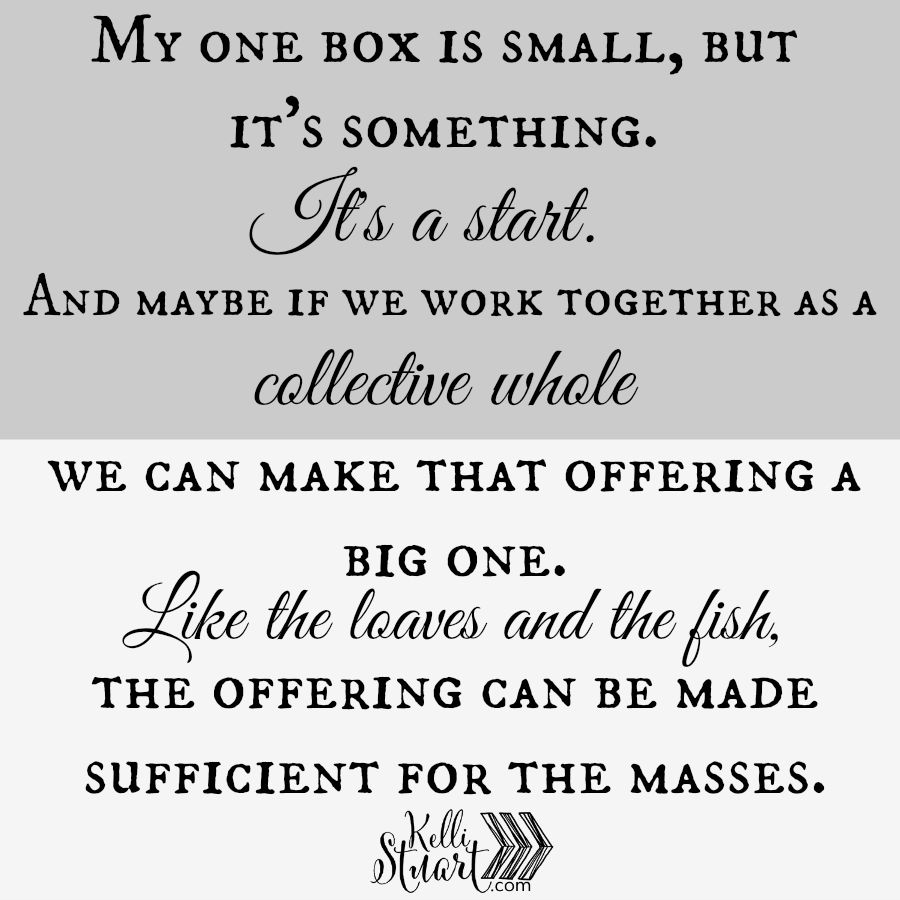 I tell you these things not to bait you for encouragement, but rather to let you know that I get it – what we have to offer feels small. But a lot of small can equal a big, so maybe we can join forces.

My small box combined with your small donation, and her box, and his donation all come together to clothe and feed the desperate.

My orphan hosting combined with their adoption, and your sponsorship, and their mission trip to paint the orphanage, and build shelving, and offer clothing all work together to show the fatherless of this world that they’re not alone – their lives matter.

[Tweet “Small can be big. It just needs a little boost.”]

Want to be small with me today?

A list of small things you can do to make a big difference:

Sponsor a child through Compassion International