Sparkle in the Cracks

I’ve been at this parenting gig for awhile now. Not long enough to call myself an expert, but definitely long enough to feel like I’ve got a handle on a few things. Of course, I’ve got a teenager now, and a tween right behind him, so on any given day I pretty much feel like I’m winging it in some way or another.

Besides that, however, I’m pretty sure I’m nailing this motherhood thing. AS IF IT’S HARD!

Every once in awhile, though, I’m thrown for a loop, and it’s usually by something fairly benign. Sometimes the old lessons that I feel like I should have mastered come back to bite me in the backside, and I find myself back at square one, looking at all these small people and wondering why there are so many of them and what on this side of heaven could they possibly want from me?!

My 11-year-old is currently obsessed with making slime – making homemade slime in one of my tupperware dishes. And what does one do with homemade slime, you might ask?

Well, I asked the same question and I got “the look”. You know…the look that kids throw your way that make it ten shades of obvious you are completely clueless to anything really important in life. It’s the look that says you should probably just go ahead and give up, because clearly you are failing at life.

“You play with it, Mom,” she answered, and I felt like I needed to apologize for even asking the question. “It’s very satisfying.”

Then she had me stick my hands in the slime and squish it around, and…okay yes, the way it rolled through my fingers was kind of satisfying.

Then she took her tub of slime to her room, and I stared at the aftermath and felt my blood begin to boil ever so slightly, because making slime is a messy endeavor. It involves Borax and shaving cream and glue, and then you throw in food coloring, because obviously. And you top it off with glitter because everyone knows that the world spins on an axis of glitter.

The agreement we’d struck in this whole “slime making” ordeal was that she had to clean up after herself, and she did that as well as any 11-year-old would, which means there were faint streaks of shaving cream spanning the width of the table, half dried drips of glue running down the sides of the chair, and Borax crystals crunching beneath my feet.

But the piece de resistance was the glitter that now permanently resides in the cracks of my table. My brand new table. The table that Lee and I spent actual dollars on for the first time in our adult lives. Every table before this one was a hand me down. The last table was in such bad condition that it became a hazard to anyone who attempted to sit at it.

But this new table is a gem, and now it sparkles. Hot pink sparkles, to be exact.

My initial reaction was indignation. I mean, how dare she?! Why couldn’t she be more careful? WHY DID SHE NEED TO MAKE SLIME IN THE FIRST PLACE?! 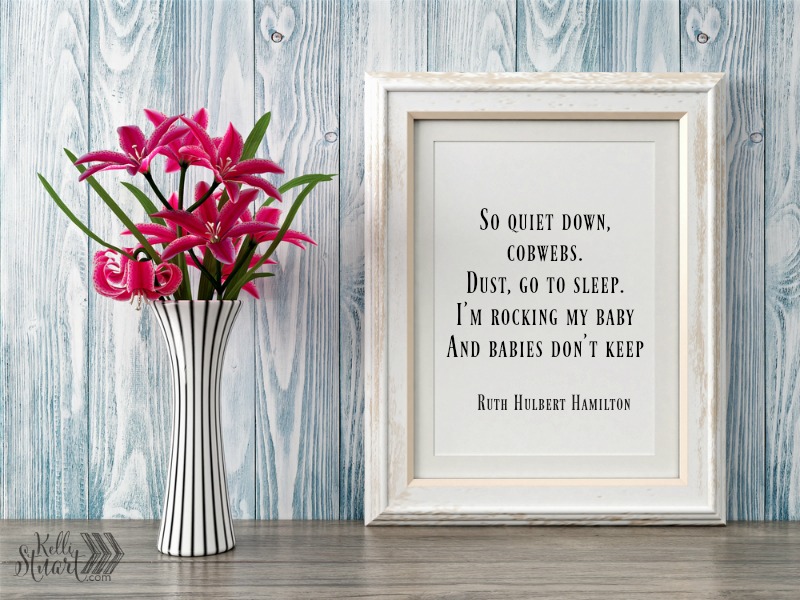 So many questions, none of them with decent answers, and as I set to trying to remove as much of the glitter as I could the two year old came tearing by me, belly laughing at the top of her lungs while her brother chased close behind.

“Hi Mommy!” she yelled as she ran past, and then she crashed into the end table where someone had left a cup of lemonade, which immediately spilled and scattered across the floor I had mopped just moments earlier.

I wanted to cry. I wanted to erase all the glitter, and silence all the noise, and dump slime over all the heads, then drink wine and eat ice cream and wallow in my own self pity.

I opened my mouth to let out a sigh of frustration, but then I caught her eyes. They were big and wide, and full of toddler remorse, and it stopped me in my tracks.

I felt suddenly so foolish because hadn’t I already learned this lesson 100 times over? Don’t I know that these children don’t keep – that they grow and suddenly they’re not into slime, but boys and makeup and trendy clothes? 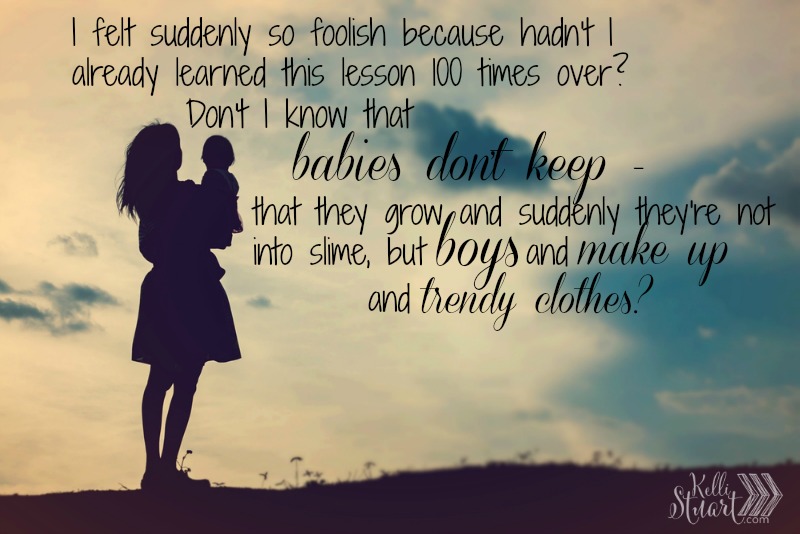 I knelt down in front of her and gave her a big hug, squishing her soft cheek against mine because it sinks in and feels so sweet. She threw her arms around my neck and squeezed hard, then kissed me straight on the mouth.

“I wuv you!” she yelled, then off she ran again while I pulled out a rag to mop up the lemonade that was sure to make our feet stick for days.

[Tweet “And now I’m sitting at my table alone, remembering once more that babies don’t keep.”]

And now I’m sitting at my table alone. The kids are all in bed, and I’m here typing out the story of a day when I had to relearn the lesson that babies don’t keep, and that spilled lemonade isn’t worth losing my cool.

And while I write, the table sparkles in the glowing lights, flecks of pink glitter lighting up the cracks right in front of my eyes.