When Fighting the Good Fight is Hard

She walks out of the bathroom and looks at me imploringly, asking without saying a word, and knowing my answer without really having to be told.

Hanging her head, she trudges to her room and pulls a rash guard on over her two piece bathing suit, then heads out to swim.

This was our compromise. She so desperately wanted a bikini, and I caved, but on one condition: She only wears it at home when it’s our family. If anyone else is over, or she goes to a friend’s house, she wears a swim shirt. 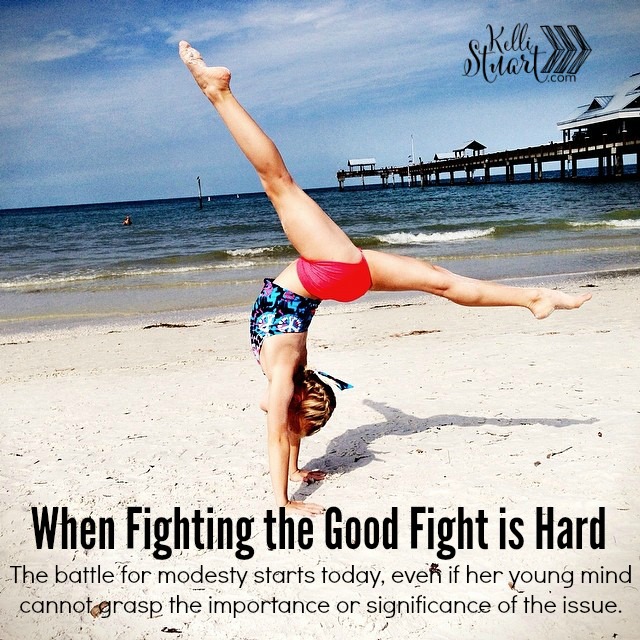 This has been a tough rule for me to implement, if I’m being honest. Really tough. And I’ve caved on occasion, which isn’t fair to her. But the battle wears me out, because while I do see the value in teaching my daughter modesty, I also understand the struggle that she faces, especially living in a state when it’s bathing suit season year round.

It’s almost true what she tells me: Everyone she knows wears two pieces. And at nine years old, when she’s oblivious to sexuality, teaching modesty is a difficult concept. At this age, it simply boils down to obedience. I require her compliance on this issue even though she doesn’t understand.

“Why does it matter if I show off my body?” she asks. “People don’t really care about looking at me.”

Oh, but my daughter, they do.

It complicates matters when she’s a gymnast, and at nine years old has a body that is envious. Toned and lean, she doesn’t look like most nine year olds, and it makes her dad shudder to think what she’ll look like at 16.

So we fight the fight, even though it’s hard and it doesn’t make sense, but sometimes the boundary lines get muddied, and I stumble over myself, and I can’t find the balance.

“Well, we’re going to the beach, but it’s just with my friends who are girls, so can I wear my bikini?”

Round and round we go with me bringing bathing suit after bathing suit home for her to try on. Tankini’s and cute one pieces. Fun rash guards that are bright colors. Everything I can do to show her that wearing a bikini is not the only way to have a good time in the sun.

It’s a battle I’m willing to fight, but I admittedly get tired. I grow weary with the constant asking, the forever boundary pushing, and she’s only nine. We have a long way to go.

But I believe it’s a worthy battle. I really do. In a world that defines women by how they look, I want my daughter to have confidence that her bikini body isn’t what’s most important.

And fitting in, though so very compelling, isn’t all that important, either.

I want her to respect her body, and not to define herself against a culture that says more skin means more beautiful.

That being said, what I won’t do is tell her to cover herself in order to help the boys control themselves. It’s not her job to try to control a boy’s physical impulses.

The truth is, deep down I don’t have a huge problem with two piece bathing suits. Two piece or one pice, a bathing suit leaves little to the imagination, and I think there are plenty of cute two pieces that don’t look like little swaths of lingerie.

But I can predict the future, and I know that if a boundary line isn’t set now, at nine, then when she is sixteen and her body is everything that terrifies her father, it will be too late. The battle for modesty starts today, even if her young mind cannot grasp the importance or significance of the issue.

So every time she comes out with wide, imploring eyes, I offer her a smile and a wink, then toss her the rash guard and remind her that she is precious and beautiful, and it’s okay to be different.

I also bought her a cute tankini that shows a tiny strip of her abdomen.

Compromise. This is the key to winning the good fight.

This post is not at all meant to be an indictment on anyone who allows their daughter to wear a two piece. This is the struggle that we face as a family based on things that we feel are important to us. I am not in any way condemning or laying guilt on those who choose differently.