Wisdom From The Front Lines: Where it all Began 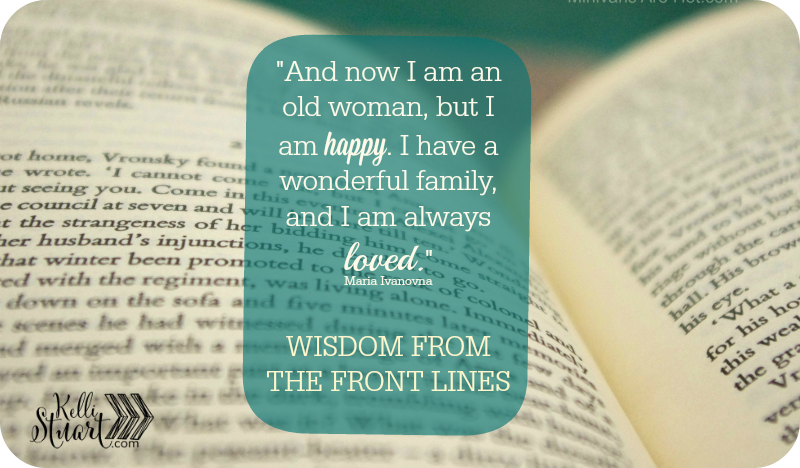 This is the final installment in my series of stories from Ukrainian World War II survivors. I leave you with Maria. I first heard Maria’s story as a sixteen year old, while on a mission trip to Kiev, Ukraine. Her story sparked a passion in me to know more – to understand better how this Great War affected the world.

Maria’s story is the one that started it all. My entire life shifted when I heard her retell of the days she was taken to Germany and forced to build artillery for the enemy. Maria was a delightful woman to speak with. Her eyes danced, moving in rhythm with her words. I will forever be grateful to her for entrusting me with her history.

“The morning came when we were to go to the station.  My sister Anna and I left together. My older brothers were already gone, fighting on the front for our safety.  Papa was very ill so he could not accompany us.

When we arrived [the Nazis] forced us all to stand in line for hours while they walked around screaming at us.  Finally, we were inspected and separated onto different trains.

When I reached the front of the line, a German woman grabbed my hands and inspected them.  She did the same to Anna.  I found out later that they were looking for young girls with large hands who would be good at physical labor.  I guess my hands were what she wanted because as soon as she looked at them, she pulled me away and pushed me onto a train by myself.  Anna was sent to another train.  I thought I would die of grief and fear that day.

I was only fourteen years old when they sent me away to work in an underground chemical plant.  There were many other children there with me.  Our job was to fill German bullets with gunpowder all day long.  During that time, I never saw the light of day.

We worked long hours with very little food.  For some reason the other children in the camp turned to me for support and protection.  I don’t know why I was given so much responsibility, but I felt that I could not let them down. I soon became very angry as our captivators cut back our meals from two per day to only one per day.  And worse, the food was often infested with bugs.  We were all ill, and some children even died.  I had to do something.

I refused to work one morning and, using broken German, I demanded better treatment.  Instead, the two officers in charge beat me very badly.  It’s a miracle that I survived.

I woke up days later.  A young woman washed my face and as I began to stir, she sang to me.  Her voice was beautiful, and I thought she must be an angel.  It turns out she was a young German nurse who took pity on me, and had been nursing me to health.

I was sent to a textile factory after I recovered.  This was a much nicer job.  I was given regular meals and the work was easier.  But I didn’t stay there long.  After only a few months I was transferred once again, this time to a tank plant.  Here I helped assemble German tanks.  This was terrible work for a sixteen year old girl.

A few months after I arrived, word came that the war was over.  The next day, I tasted freedom for the first time in two years.  I walked out of the terrible camp with great joy, and also great fear.  I didn’t know where I was or how to get home.

After a few days of wandering, I came to a train station.  As a refugee, I had to sneak onto a train just before it left.  I rode wherever I could find room.  Sometimes, I could not find room inside a train car, I and was forced to hang on to the rails outside the car for hours.

After two years of near starvation and hard labor, I finally arrived home.  It was many weeks before I found my family again.  And I found them quite different.

My brothers were all killed in the war. My father had been sent to Babi Yar (a killing ditch outside Kiev, where the Germans killed over 33,000 Jews in three days). He survived this awful place, but not without emotional pain that haunted him. The life went out from his eyes.  He tried desperately to continue to be strong for us girls, but he felt defeated.  He missed my brothers very much.

Anna survived her years in Germany as well.  She had a better time than I did.  She was a servant in the house of a wealthy family.  She was treated with some kindness though she was often scorned and abused verbally.

Those were very hard years for our country.  No one was untouched by tragedy.  Everyone lost a loved one.  But we survived and we persevered.  And now I am an old woman, but I’m happy.  I have a wonderful family, and I am always loved.”