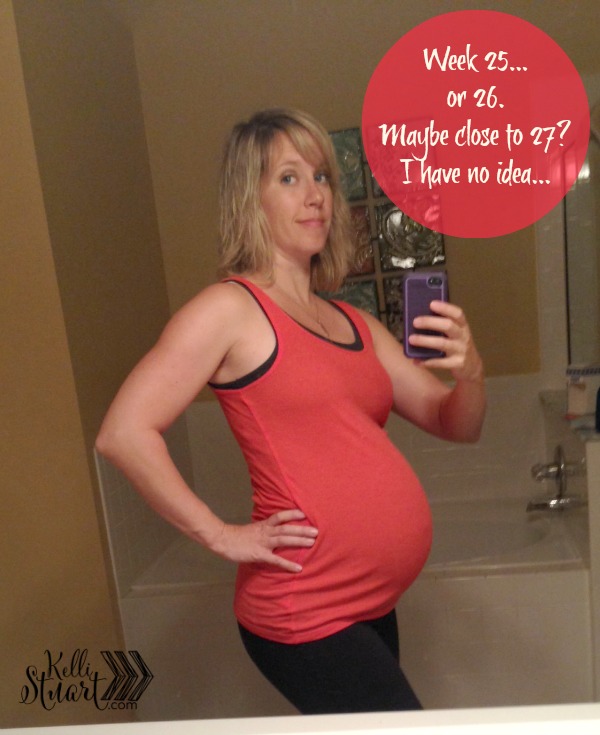 Here’s the thing – the baby weight gain thing is kicking me in the tail this time around. Not that I’m gaining more weight than I did with any of the other three, but rather that I seemed to have…ahem…spread out a bit more this time around.

My original due date was September 19, but after the 20 week ultrasound, the technician felt we needed to push the due date back to September 30. Because I apparently offended her somehow upon walking into the room. Or maybe she just hates pregnant women?

So if anyone asks me when I’m due, I will give the oh-so-vague reply, “Some time in September. Mid to Late. Hopefully closer to mid than late.” It’s not a cool answer. I can’t even tell you for sure how many weeks along I am. 25? 26? 27?

At this point, I’m starting to wonder if this pregnancy may, in fact, be a permanent condition.

Earlier this week, three different women asked me if I was having twins. “Are you sure?” one of them replied when I told her no. Well, my new friend, now I’m not. Maybe one of them is good at hide and seek? Who can be sure of such things, really? Based on how quickly I’ve grown from cute little bump to MASSIVE MELON-BALL BELLY, perhaps I’ve spontaneously and miraculously begun growing triplets. 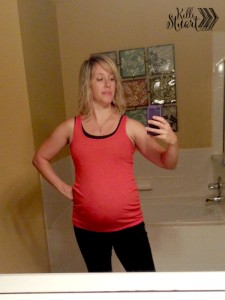 If that were to happen to anyone, it would be me.

Other than already being uncomfortable, and wondering how on earth I’m going to make it another 13-15 weeks, things are going relatively smoothly. I haven’t slept well in a week, which I attribute to a potential hormone surge by baby girl. Because carrying girl babies tends to put me through the ringer.

I don’t have any big cravings this time around, although my car did steer itself into a McDonald’s Drive-Thru today, and the possessed pregnant side of my brain ordered a chocolate milkshake. I tried to talk her out of it, but the urge was ultimately too great to ignore.

That was the best chocolate milkshake I’ve ever eaten.

I leave on Wednesday for California for a week with my tribe, my fellow creatives who gather yearly to spur one another on toward our passions and goals. When thinking about the trip, I feel near giddy with excitement. But when thinking of the plane ride across country to get there, I feel suddenly light-headed and nauseous.

I mentioned the fact that I’m carrying a large watermelon in my midsection, right?

Two weeks after that trip, we will pile into our (smokin’ hot) minivan for a road trip north. Hours upon hours in a car with a 15 pound watermelon in my gut (that also happens to kick me repeatedly in the bladder…yay me) sounds a bit like a torture chamber, but whatever. It will make the time pass quicker, and time passing means that soon I won’t be pregnant anymore.

Unless, of course, my suspicions are true and I really am going to be pregnant for the rest of time.

That’s because I am. Humor me, please?

It’s not all horrible, to be sure. There are moments that I enjoy. I do love feeling the baby kick. It’s really magical to feel those bumps and know that life is growing inside me. I won’t ever lose the awe of that experience.

Other than that, though, meh…I’m over it.

Keeping my eye on the prize is the only thing motivating me to power forward. Well, that and the fact that I have no choice. There’s a sweet baby girl waiting at the finish line, so I’m choosing to focus on her, and I am really, really excited to meet her.

Happy Tuesday to you all.