Looking Back, Looking Ahead

I’ve never been very good at stepping away. Perhaps one of my greatest flaws is my constant fear that I’m missing something. I’ve been this way my entire life. And, lucky me, I produced a child who is exactly the same.

This week I stepped away. I unplugged as much as I could, and I just entered life fully and completely, and a crazy thing happened when I did this:

I don’t think I missed anything of great significance, and as far as I know not a single person really missed my online presence. Funny thing, this online realm. You feel like what you do is so important, and if you’re not doing it you’re somehow letting people down.

The pressure is something else.

We had a sweet week as a family. Cancer changes everything, which means our time was spent truly relishing the little moments – those precious down times when you just sit and enjoy one another’s company. There were things I could have said, but not many things I needed to say.

I just needed to be.

We are hosting “K” again this year, and it’s totally different the second time around. The first year was spent doing every fun thing ever imagined to give her an experience she’d never forget. This year is real life, and real life is a lot less exciting. That’s produced more stress than I thought it would, but this is the part of ministry that we often forget about.

The hard part – the part that requires you to love in the quiet, not with experiences or things, but with words and time. Cooking in the kitchen, reading books, watching movies. Loving someone in the quiet is actually much harder to do. The constant pouring out is more exhausting than I imagined it would be.

Plus there’s that baby we all have to deal with.

And by deal with, I mean snuggle. Oh the snuggles – they’re simply the best at this age.

As I head into the New Year, I’m looking over some of the posts from this past year that have impacted me. The benefit of blogging is you have a record of the good, the bad, and the ugly. It’s always fun for me to go through each month and try to pick one or two posts that I particularly enjoyed writing, and then share them with you all who have so faithfully taken this journey with me.

Happy New Year, everyone! Praying a full and blessed 2015 over each of you right now as I type. 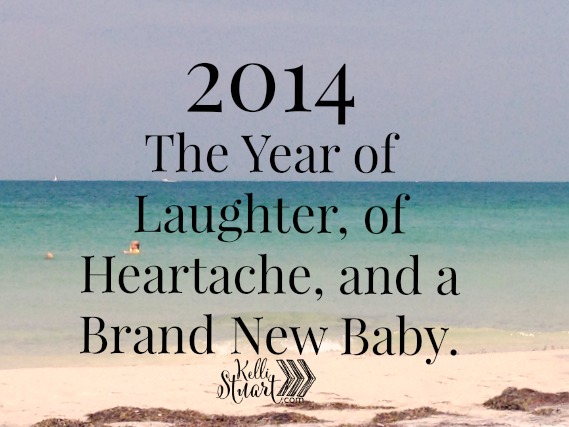 Without further ado, I hereby give you 2014 at a glance.

January: At the beginning of 2014, I was still blogging at Minivans Are Hot. We also went camping with friends right after the New Year, and this post from that experience still makes me laugh. My husband, man. He is always good blogging fodder.

February: This was the month that I announced my pregnancy, but the post that got the most traffic, and resulted in a few nasty emails, was this one when I called out the real issues behind the Sochi Olympics.

March: I finally moved here to my new site, and this post was one of my favorites from that month as I began to better understand my realistic child, so different from dreamy, creative me.

April: There are a couple of posts that I really enjoyed writing this month, so I’ll share two. The first is when I destroyed the magic of childhood and revealed to my first born the truth about the Tooth Fairy and Santa Clause.  The second is when I revealed that we were, indeed, having another little girl.

May: There are also two posts from this month that seemed to resonate more than others. The first was when I shared my reasons for not putting my son’s first solo on Facebook. That pesky quest for fame seems to be something we’re all cautious of. The second was when I shared my own adventures in risk taking (sometimes foolish adventures), and my hope that someday my children will be risk takers, too.

June: This was the month we found to about my father-in-law’s cancer. We’re still learning this lesson as we walk this unwelcome path.

July: I didn’t write much this month. I took a much needed break as we were on vacation, and I did something crazy. I READ BOOKS. Like, actual real-life books with paper and stuff. I read the entire Divergent series this month, and I wrote this post to explain why I won’t be letting my kids read that series for some time.

August: This is the month that I called out Victoria Osteen’s heresy, and I got called lots of super fun names on Twitter.

September: Not much happened this month. You know – I just had a baby. Here is the post I wrote describing how pregnancy dreams and severe impatience just about did me in. And here is the story of Annika’s birth.

October: This is the month that Annika took over my blog (wink) and for 31 days she wrote all about this scary life on Earth. So young, and already a prolific blogger…

November: The post when I told you there was a colony of roaches LIVING INSIDE MY MICROWAVE. They’re dead, by the way. There isn’t room enough in this house for me and them.

December: I haven’t written a lot this month, either, but what I’ve written I enjoyed. This post about Lee’s philosophical musings on Michael Jackson, however, might just be my favorite.

So there you have it! Another year of blogging under my belt. I’m looking forward to the New Year as I continue to grow and learn as a writer, as a mom, and as a wanderer in this big, scary world.

Have fun tonight, everyone!!